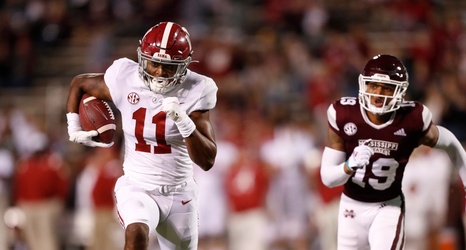 Traeshon Holden is the latest playmaker for Alabama at wide receiver.

Crimson Tide fans knew the native Floridian had talent in the 2020 recruiting cycle.

He played at Narbonne (Calif.) High School for his final prep season, finishing his senior year with 31 catches for 512 yards and seven touchdowns. Regardless of the attention Agiye Hall received on A-Day, Holden performed well in the spring game too. He caught nine passes for 89 yards and helped sophomore quarterback Bryce Young led the first-team offense to a 13-10 victory.

The 6-foot-3, 208-pounder has been getting extended playing time, and he produced versus Mississippi State.