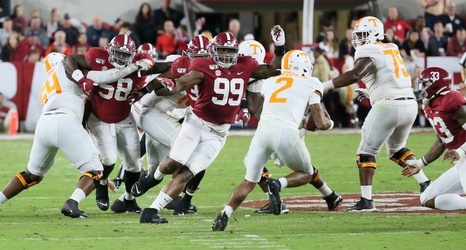 After last Saturday’s game it seemed as if everyone needed a bit of a pick me up. Notably Alabama quarterback Tua Tagovailoa who suffered a high ankle sprain which required surgery the following Sunday.

But following the team’s 35-13 win, senior defensive lineman Raekwon Davis decided to to send his quarterback some positive vibes in the form of song.

With so much concern around the team’s star quarterback it’s nice to see that some are approaching the situation with a positive attitude. Tagovailoa himself even told teammate Terrell Lewis that he will be back for LSU despite having no timetable to return.