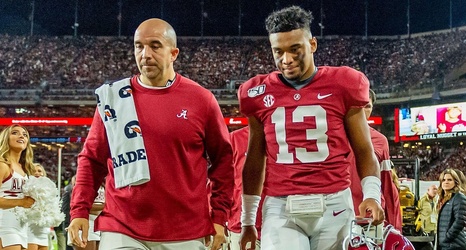 TUSCALOOSA, Ala. -- Alabama coach Nick Saban said on Monday that quarterback Tua Tagovailoa had successful surgery on his ankle and will participate in only non-weight bearing activity for several days before beginning traditional rehab.

Tagovailoa suffered a high-ankle sprain during this past Saturday's win over Tennessee and had surgery the following morning. In a statement following the surgery, Saban said Tagovailoa would be out for a week, but on Monday he told reporters how there's "no real timeline for his return."

"But the expectation is he will be non-weight bearing for several days and then he'll be able to come back as his rehab allows him," Saban said.