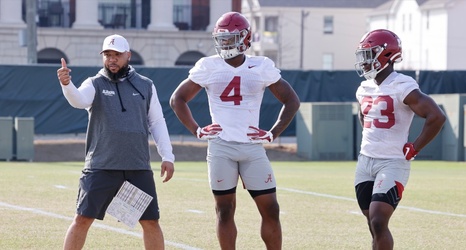 Najee Harris is gone, but Nick Saban is excited about the talent Alabama football has at running back.

Before it welcomes Camar Wheaton (five-star) in the summer, the Crimson Tide has Brian Robinson Jr., Keilan Robinson, Trey Sanders, Jase McClellan, Roydell Williams, and Kyle Edwards. Fans have not seen what Edwards is capable of, but they have witnessed the abilities of both Robinsons’, Sanders, McClellan, and Williams. Three things make the job of a first-year starting quarterback easier: a veteran offensive line, quality options at wide receiver/tight end, and a rotation of stellar backs.