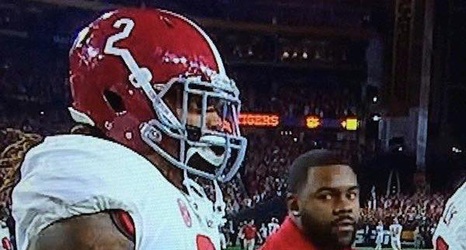 He is the energy behind the Baltimore Ravens, but that does not mean he takes kindly to disrespect.

Not only has everyone laughed at the viral photo shown around the world of Mark Ingram and Derrick Henry at the 2016 College Football Playoff National Championship Game, Alabama’s first-ever Heisman Trophy winner has seen it himself and was not pleased.

The photo has been used as a meme with a 6-foot-3 monster in Henry towering over the 5’10” Ingram, in shoulder pads and a helmet at the coin toss.

Alabama defeated Clemson by a score of 45-40 to win a national championship, but Ingram was forced to live with that lasting image for a while.