Landon Dickerson to start for Eagles versus Cowboys 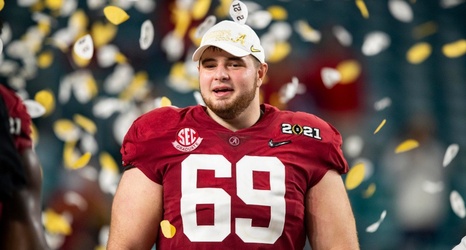 The University of Alabama will have three alums starting for the Philadelphia Eagles next week.

Landon Dickerson will start at right guard for the Eagles on Monday Night Football versus the Dallas Cowboys. The news came from Dave Spadaro, an insider for the team. Nick Sirianni, head coach of the Eagles, announced the news to reporters.

Dickerson joins Jalen Hurts and DeVonta Smith as a starter. He was selected in the second round of the NFL Draft after a successful collegiate career with the Crimson Tide. Dickerson was Alabama’s “Iron Man” on the offensive line, guiding the unit to the Joe Moore Award in 2020.