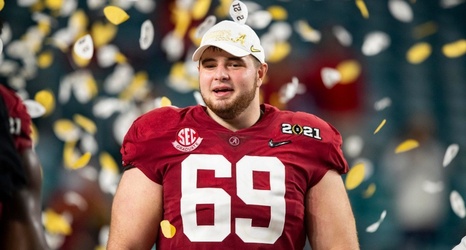 Before he suffered a knee injury versus Florida in the Southeastern Conference title game, Landon Dickerson was projected to be taken in the first round of the NFL Draft.

He shared the SEC’s Jacobs Blocking Trophy with Alex Leatherwood and won the Rimington Trophy. In becoming the nation’s top center in college football, Dickerson earned Unanimous All-American honors and was voted a permanent team captain by his peers. He made first-team All-SEC and anchored the most explosive offense of the Nick Saban era in 2020. A native of Hickory, N.C., Dickerson positioned Mac Jones, Najee Harris, and DeVonta Smith to be Heisman finalists.