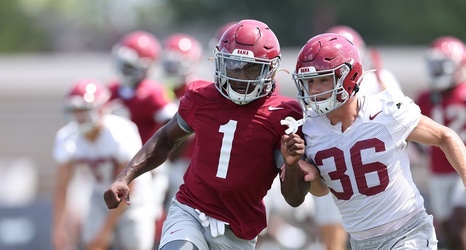 Opportunity presents itself in several different ways, and unfortunately, injury is one of them.

Alabama’s cornerbacks room has been bitten by the injury bug recently as senior Khyree Jackson (groin) and junior Eli Ricks (back) have been sidelined in short term. But with the Crimson Tide’s second scrimmage coming up this Saturday that serves as somewhat of a final audition before the coaching staff begins to decide on starters, sophomore Kool-Aid McKinstry has a big opportunity to separate himself.

In his most recent press conference on Wednesday, Nick Saban said he “can’t tell you who would be the starting corners at this point,” but a big performance from McKinstry on Saturday could help swing the decision in his favor.