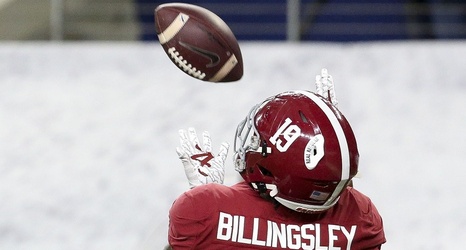 NFL Draft pundits have started their Way Too Early first-round projections for 2022.

Jahleel Billingsley has to be considered as one of those players. The money year is now upon him at the University of Alabama.

A native of Chicago, Ill., Billingsley came to life in 2020 as a tight end. During the final seven games of last season, Steve Sarkisian targeted the former four-star a lot. He caught 17 passes for 274 yards with three touchdowns. Billingsley’s three scores came in matchups against Auburn, LSU, and Notre Dame. The 6-foot-4, 230-pounder showcased his hands, speed, routes, and hurdling abilities for Alabama fans.