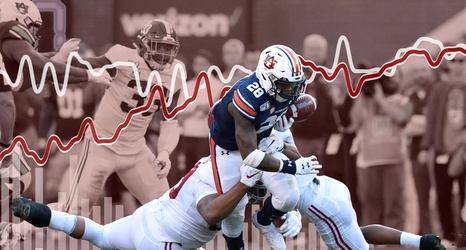 Not seeing any graphs below? I’ll post links as soon as I can.

You know, I was ready for this chart to show a very dramatic delta: on Saturday, Alabama looked surprisingly efficient against what had been a stout Auburn defense all season long. Auburn’s offense was doing it’s usual prayer-pass strategy, which was working when it needed to, but depended on a lot of 3rd down sideline catches and penalties to move the ball. That’s usually not a recipe for strong success rates.

Plus, the efficiency stats I use are derived the SP+ system that Bill Connelly uses: it’s the same one that says that Alabama would have won this game 94% of the time based on the stats accrued in the game.