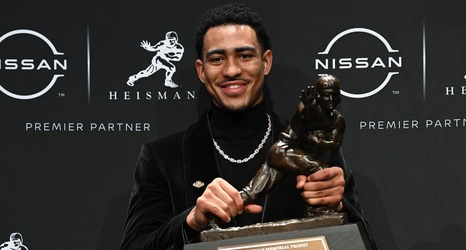 No one knew Nov. 21, 2020, would be the catalyst for greatness in Alabama football.

The Crimson Tide faced Kentucky at Bryant-Denny Stadium. Alabama had the most explosive offense in the nation under Steve Sarkisian, and Mac Jones was the triggerman at quarterback.

In the third quarter, a true freshman from California entered the game.

Bryce Young escaped pressure, rolled to his right, and hit DeVonta Smith for an 18-yard touchdown. It was Young’s first career scoring toss, and it led to Smith becoming the first wide receiver in Crimson Tide history to win the Heisman Memorial Trophy.