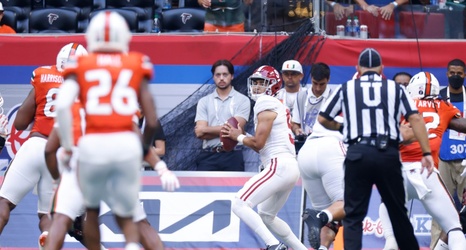 All eyes were on Bryce Young last week, and he delivered the goods.

The sophomore earned the starting quarterback job because of his performance in spring, summer, and preseason camp.

Everyone in the football program has raved about him, and Mercedes-Benz Stadium witnessed it first-hand.

Young, a native of Pasadena, Calif., put the college football world on notice with an incredible game. He impressed Crimson Tide fans, head coach Nick Saban, and the ABC commentary team. Young completed 27 of 38 passes (71 percent) for 344 yards with four touchdowns and no turnovers. He was sensational against the blitz, tossing three scoring passes with pressure in his face.