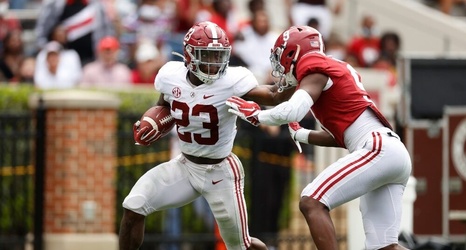 For the past two seasons, there has been one player leading Alabama out of the backfield in former star running back Najee Harris. As he became the school’s all-time leading rusher in 2020 it was evident that a rotation was not in the books for the Crimson Tide offense and even head coach Nick Saban eventually caught on.

Saban went on record numerous times in the past stating that Alabama put most of the workload on Harris’ plate because of his ability to get stronger as the game progressed.

Now that the Antioch, CA native is off to the NFL Draft, Alabama is likely headed back to a more traditional rotation of running backs to try and replace Harris.