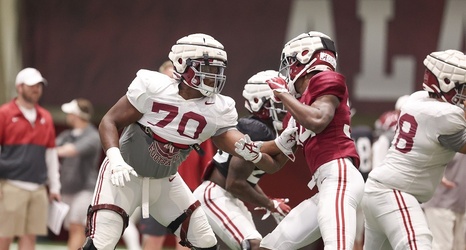 Nothing is perfect at this point in time in time at fall camp, and that certainly isn’t the expectation Nick Saban has for his team following its first scrimmage.

Saban acknowledged that he felt “OK” with where the team was at following its session in Bryant-Denny Stadium but did highlight some sloppy play.

As an entire unit, the offensive line still has ways to tighten up its play, but Saban did note that he saw improvement from the first group while the second group struggled.

“It really is hard to evaluate,” Saban said. “But I thought the first offensive line was improved.