Alabama’s Landon Dickerson had a ‘successful’ knee surgery, according to Nick Saban 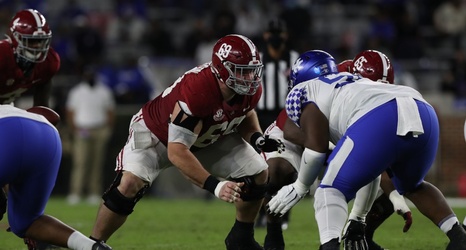 Landon Dickerson is about to start his road to recovery.

After sustaining ‘significant’ ligament damage to his knee in the Southeastern Conference Championship Game, Nick Saban announced the starting center for Alabama football would miss the College Football Playoff. He has had surgery on his knee and according to Saban, Dickerson’s procedure was ‘successful.’ He is expected to be strong in the future and has been a great leader for this year’s team. A native of North Carolina, the former graduate transfer has earned a few individual accolades this season.

Dickerson was named first-team All-SEC (league’s coaches) and first-team All-American (Associated Press), while earning the SEC’s Jacobs Blocking Trophy and being chosen as a finalist for the Rimington Trophy.