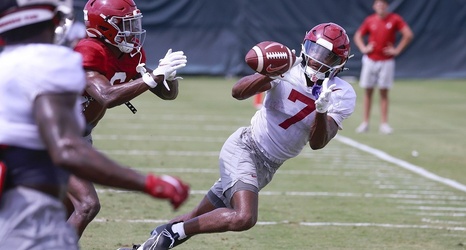 He recorded two touchdown receptions as a freshman — including a 28-yard game-tying score against Auburn in the Iron Bowl –but Ja’Corey Brooks captured a very special moment on Tuesday.

Larry Fitzgerald, an NFL legend, came to Tuscaloosa to talk to the Crimson Tide. Fitzgerald, 38, is a future first ballot Hall of Fame wide receiver. His 16-year career, which started in 2004, came with the Arizona Cardinals. After an incredible collegiate tenure at Pittsburgh, Fitzgerald would accomplish several feats in the National Football League.