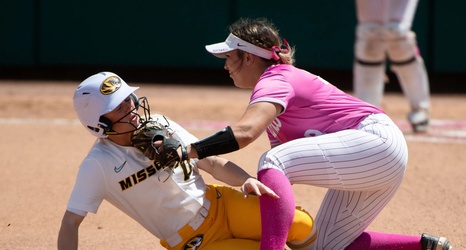 If Alabama can just sweep... Well. So much for that. Bama won two of three against unranked Missouri. However, the Crimson Tide may have the softball gods smiling down on them as chaos reigned supreme this weekend. Think 2011 college football Week 12 chaos. But more on that later.

The first inning of this game is indicative of the deep funk the Crimson Tide is in right now. After two strikeouts sandwiching a single, the fourth batter of the game, Kimberly Wert, hit a long shot to centerfield off Montana Fouts that should have been caught.