Alabama pulls out a thrilling win in four overtimes versus Auburn 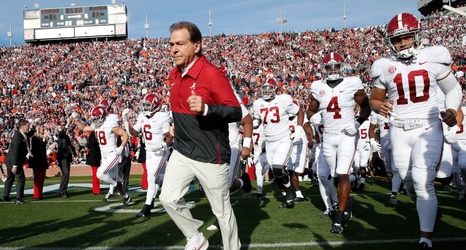 Nick Saban gets his first Iron Bowl victory at Jordan-Hare Stadium since 2015.

It was not pretty, but Alabama pulled out a thrilling win in four overtimes. Despite its offense struggling for most of the game, Bryce Young came through when his team needed him. He tossed a touchdown pass to freshman receiver Ja’Corey Brooks in the fourth quarter and one to Slade Bolden in overtime. The sophomore quarterback took seven sacks; however, he found a way to total 317 passing yards. John Metchie recorded 150 yards receiving on 13 catches and Brooks had two catches for 49 yards, including a 28-yard touchdown.