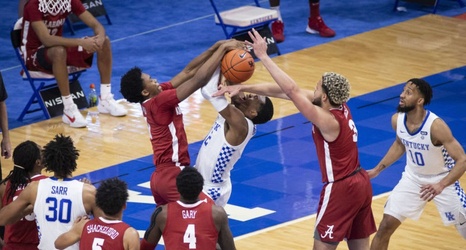 Alabama Basketball: Crimson Tide won big and the first time in Lexington since 2006. Two players left the game due to potentially serious injuries.

An Alabama basketball win in Lexington is uncommon. The Crimson Tide last beat Kentucky at Rupp Arena in 2006. Tuesday night the Crimson Tide not only won, it won an impressive, 20-point victory.

The Wildcats shot 34 percent for the game, including just 22 percent on their 18 three-point attempts. The Crimson Tide defense had much to do with the Cats’ cold shooting. Kentucky outrebounded the Crimson Tide, 44-36, but lost the turnover battle with 19, to only 11 for the Crimson Tide.