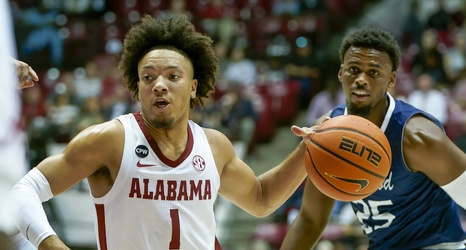 The leftovers have been reheated, the kiddos are in bed, and that Irish coffee has just been brewed - it’s time for some Tide Hoops, folks! The 18th-ranked Crimson Tide close out the opening day of the Phil Knight Invitational with a massive matchup with the 12th-ranked Michigan State Spartans. Tom Izzo’s squad is as experienced and battle tested as anyone on the young season, so this will be an incredible opportunity for Alabama to see where they stack up in the national landscape.

Sparty will be a bit short-handed tonight, though. It was announced last night (after I had already written the preview, ugh) that both starting wing Malik Hall and sixth man Jaden Akins (ignore the mistaken tweet below that he is a starter) will miss some time with a foot and ankle injury, respectively.