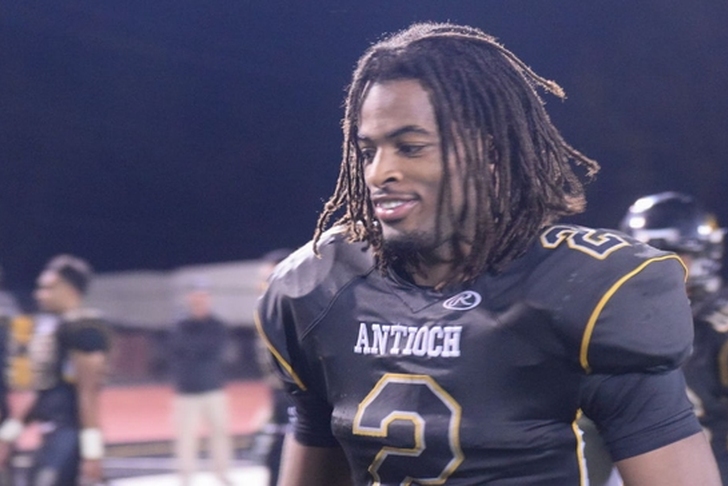 Five-star running back Najee Harris, the top overall prospect in the 2017 class, has been verbally committed to Alabama since June 2015, but has been recruited heavily by Michigan over the past several months. The Wolverines have made such an impression on Harris that they have become a real threat to flip Harris from the Tide.

Harris, who plans to enroll at whichever school he picks following the U.S. Army All-American Bowl on Saturday, admitted earlier this week that he was still "undecided" on what his final decision would be.

Now, it appears he has made up his mind.

According to Barton Simmons of 247sports, Harris has changed his return flight plans from the Army Bowl to Birmingham instead of returning home to California, as was previously planned.

Per an U.S. Army All-American Bowl operations source, Harris has requested a flight change — asking to land in Birmingham now, instead of back home in California (Oakland). That would put the running back on Alabama's campus by Sunday evening at the latest as an early-enrollee, ending a dizzying back-and-forth between Alabama and Michigan that's worn on for months.

Thursday morning, multiple sources told 247Sports that Harris' was booked for an Oakland-bound flight at the end of the trip. That was counter to what Bama commit Tua Tagovailoa said Wednesday, when he told 247Sports' Hank South that Harris would be on his flight to Alabama. As part of the invitation to play in the Army Bowl, travel is paid for, with a departing flight from San Antonio to anywhere of the player's choice. Those flights can be changed — and Thursday afternoon, after practice No. 3, Harris made use of the flexible nature of the Army Bowl's travel capabilities. It is unclear,  but assumed, that Harris' travel request will be accommodated.

A non-Bama bound player on the West squad told 247Sports on Thursday he had heard Harris would stick with his Alabama commitment, too.

Harris has previously said that he would make his decision following the All-American game. Spring semester classes at Alabama are set to begin on Jan. 11.