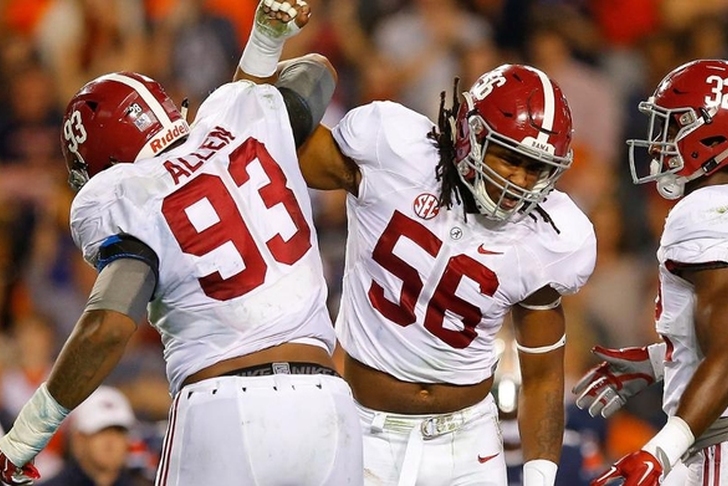 The Alabama Crimson Tide are expected to have at least 10 players picked in the upcoming NFL Draft, though as many as 12 or 13 of Alabama's 14 draft-eligible players are expecting to hear their names called over the course of the weekend.

Where are all of those players expected to be drafted? Here's Chat Sports' projections:

1ST ROUND
Jonathan Allen, DT - Pick #7 (Los Angeles Chargers)
Allen's stock is dropping thanks to the rise of some other defensive line prospects, and the Chargers would be thrilled if he fell to them. They need a 3-technique, as Corey Liuget struggled last year and in 2015. Allen can be his replacement, even with his shoulder worries.

O.J. Howard, TE - Pick #8 (Carolina Panthers)
The Panthers are going to go best player available, as they always do. In this case, there's a good chance that is Howard. He could form a dynamic two tight end offense with Greg Olsen, before taking over for Olsen.

Reuben Foster, LB - Pick #9 (Cincinnati Bengals)
The Bengals haven't played up to their talent level, which makes things tricky with their pick. When it comes down to it, they really need an impact player on defense and that's what Foster provides. Foster is the best player on the board, even if the Bengals don't badly need a LB. It's a value pick and he can help the defense right away.

Marlon Humphrey, CB - Pick #14 (Philadelphia Eagles)
With wide out taken care of in free agency, the Eagles are likely looking at cornerback and running back in the draft - and a corner makes more sense in the first round. The Eagles did bring Humphrey in for a visit and he fits the mold of a future No. 1. The key for him will be his footwork.

Cam Robinson, OT - Pick #20 (Denver Broncos)
Offensive tackle is a need for the Broncos and Robinson might be the best one in the class. He has been inconsistent in his ability to hold up against edge rushers, which might make him more of a right tackle than a left tackle, but the Broncos would start him somewhere. He could go earlier than this if a tackle-needy team reaches.

2ND ROUND
Tim Williams, OLB - Pick #37 (New York Jets)
The Jets need help at corner, but also at edge rusher. Williams was a top 10 pick earlier this season, but his off-the-field issues have dropped him likely to the second round. He could easily go before this selection, but would provide excellent value to the Jets at this spot. Williams is a fantastic pass rusher.

Ryan Anderson, OLB - Pick #46 (Baltimore Ravens)
Anderson was one of several talented players on the Alabama defense and there's actually a chance he goes earlier than this. The Ravens need linebacker help, both inside and out with the retirement of Zach Orr. Anderson fills the edge rusher need.

3RD ROUND
Dalvin Tomlinson, DT - Pick #74 (Baltimore Ravens)
After Baltimore traded Timmy Jernigan to the Eagles, they need to fill that hole along the defensive line. Tomlinson could step in and fill that role immediately.

Eddie Jackson, S - Pick #83 (Tennessee Titans)
The Titans need to upgrade their secondary, particularly at safety, and Jackson is the kind of playmaker this defense is lacking. If not for a leg injury, Jackson might have gone a bit higher.

ArDarius Stewart, WR - Pick #94 (Pittsburgh Steelers)
Stewart is one of the most underrated receivers in this draft, and the Steelers need to start looking at options at the position. Martavis Bryant's contract is up after the season, and after he was suspended for all of last year, Pittsburgh doesn't know if they can rely on him. Stewart would give Pittsburgh another reliable downfield option.