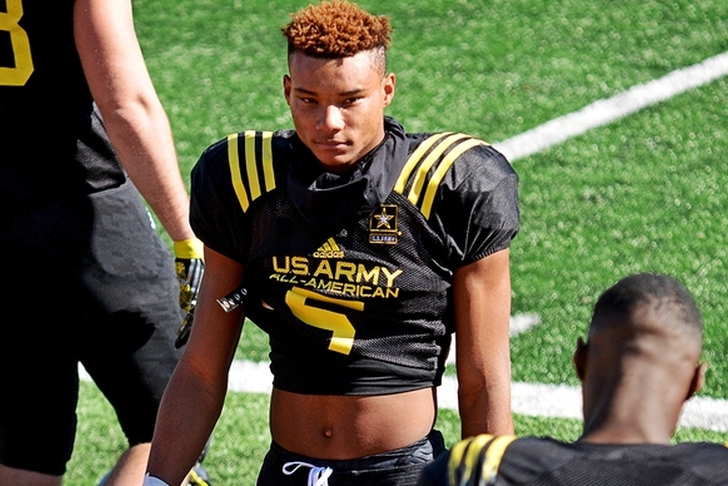 Spring practice is rapidly approaching for schools around the country. The Alabama Crimson Tide start their spring practice in less than a month. While spring ball has the attention of the coaching staff, recruiting is a never-ending process. Alabama head coach Nick Saban and his coaching staff are already hard at work putting together the pieces of the 2017 recruiting class.

We're here to detail the three most interesting stories on the wire right now with our Alabama Football Recruiting Rumors Roundup For Feb. 26th.

Five-Star 2016 WR Set To Visit Alabama
You read that right; a 2016 five-star recruit is set to visit Alabama this weekend. 247Sports reports that WR Demetris Robertson is set to visit Alabama Friday. It's a surprise visit for Robertson, who was once committed to Alabama. The five-star WR has yet to commit, as he plans to take the SAT again in order to get into Stanford. While National Signing Day has already passed, Robertson can wait longer to commit and still enroll in time to be eligible next season.

Notre Dame and Georgia are the other teams battling for Robertson. Add Alabama to that mix as well with Robertson's impending visit. The addition of Robertson would make the nation's No. 1 recruiting class even better. For all the latest news on Robertson, download the Chat Sports Android and iPhone app.

Massive Junior Day Upcoming
Robertson isn't the only big recruit coming to town Friday and Saturday. Another 60 players are expected to visit Tuscaloosa this weekend, with a full list available on 247Sports. Multiple five-stars will visit, including RB Najee Harris. He's the No. 1 recruit in the nation and has a soft verbal to the Tide. Also visiting will be DT Marvin Wilson, another five-star recruit.

Tide The Favorite For Top 100 WR?
The Crimson Tide could be the front-runner for 2017 four-star WR Devonta Smith, reports 247Sports. Smith is the No. 78 overall recruit and the No. 12 WR. He's from Louisiana, and is the No. 3 prospect from the state. Alabama would waltz into LSU territory to snag Smith, something that LSU doesn't want to have happen. But for now, it appears the the Tide are the favorite. For more Alabama recruiting rumors, download the Chat Sports Android and iPhone app.