Here Are 5 Schools Alabama QB Jalen Hurts Could Transfer To 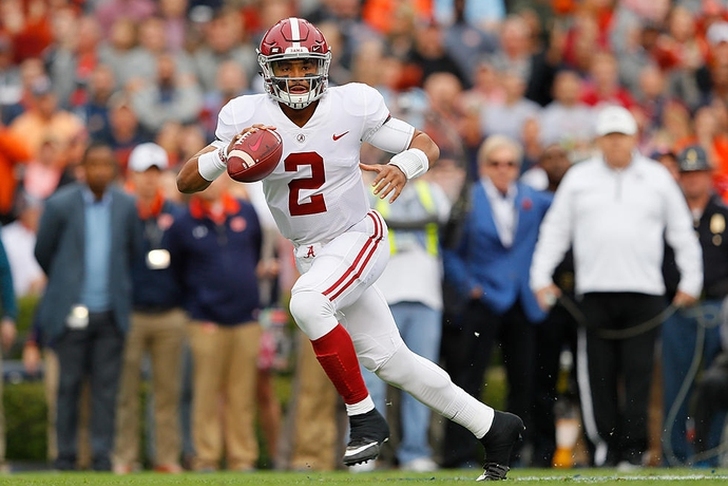 Alabama quarterback Jalen Hurts only lost one game in two years as the Crimson Tide's starter, but after being replaced by Tua Tagovailoa in the national championship game, Hurts isn't expected to keep his starting job. He and Tagovailoa are battling for the starting job this offseason, but if Hurts loses, his father said he'll likely transfer - even though he'll have to sit out a year. If that happens, here are the five schools he is the most likely to transfer to:

5) Florida Atlantic Owls
FAU would only be a legitimate option should Lane Kiffin commit to staying in Boca Raton throughout Hurts' tenure there, but Kiffin's presence gives them a shot. Remember, Kiffin was the offensive coordinator during Hurts' freshman season in Tuscaloosa, meaning that Hurts has familiarity with the offense. Plus, he'd easily win the starting job when it becomes available in 2019.

4) West Virginia Mountaineers
West Virginia offered Hurts a scholarship coming out of high school and, while they weren't a favorite then, could find themselves in the mix now. Their starting job will become available in 2019 after Will Grier leaves, and considering the way Grier was able to resurrect his career at WVU, Hurts could do the same.

2) Houston Cougars
Hurts is from the Houston area and the Cougars are used to reeling in quarterback transfers from high-profile transfers, as they did recently with Kyle Allen from Texas A&M. While Houston does not play in a Power 5 conference, they are still a nationally relevant program with a need for a starter. Plus, he may want the second act of his college career to be close to home.

1) Texas Longhorns
Texas presents a very interesting option for Hurts. Though he nearly went to A&M (they finished second in his initial recruitment), Longhorns head coach Tom Herman has not been thrilled with either Shane Buechele or Sam Ehlinger under center for him and pursued a transfer this offseason. Herman was also recruiting Hurts for Houston when Hurts was coming out of high school, so there is a past relationship there. If Herman is willing to give Hurts the inside track on the starting job, he could very well end up in Austin.