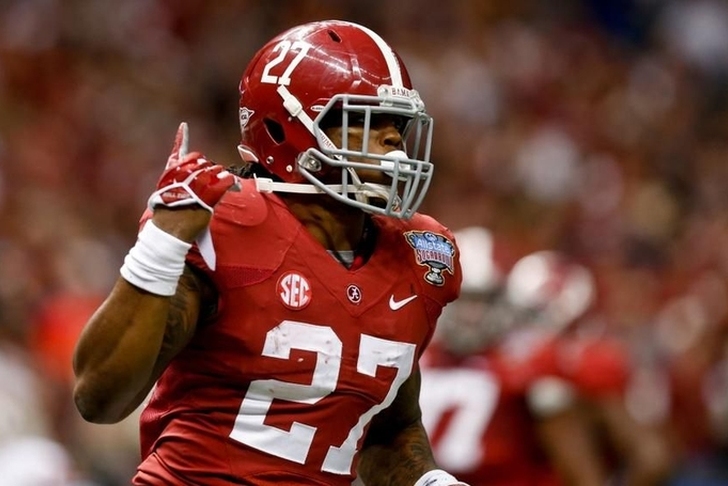 The #20 Wisconsin Badgers missed plenty of opportunities to get a jump on the #3 Alabama Crimson Tide early in Saturday's season-opening showcase at AT&T Stadium in Arlington, Texas. They paid for that dearly as Alabama's defense locked down in the second half and the offense rode Heisman Trophy candidate Derrick Henry to a runaway 35-17 victory.

Henry blew up the spot on Saturday night, rushing for touchdowns of 37, 56 and 2 yards in the first three quarters. He finished with 13 carries for 147 yards, gashing Wisconsin's defense and demoralizing the Badgers.

However, the true key to tonight's Alabama blowout was its absolutely stellar run defense. Stepping in for former superstar back and 2,587-yard rusher Melvin Gordon (2014), Junior RB Corey Clement was held to just seven carries for 15 yards in the first half. He wouldn't get much more of a look in the second half as he would go down with a groin pull early on.

All in all, Wisconsin would amass a paltry 40 yards on 21 carries, wasting a solid two-touchdown effort by QB Joel Stave. On the other end, starting quarterback Jacob Coker had plenty of time to impress in Game 1 of his current stint as the Crimson Tide's #1 QB. Coker finished 15-for-21 for 213 yards and a touchdown, leading Bama on four scoring drives. He would be replaced by Cooper Bateman who was adequate in relief but didn't have the same zing and presence that Coker showed on this night.

But, the real secret of his success was Heisman Trophy candidate and all-world running back Derrick Henry. While other Heisman candidates such as TCU QB Trevone Boykin and Michigan State QB Connor Cook sputtered in Week 1, Henry dominated and vaulted his name to the top of the board when it comes to the elite individual talents in the nation.

As for Alabama, those writing them off in favor of the likes of Auburn and Georgia in the SEC title race need to keep a copy of this tape. It'll be useful as the season winds on.