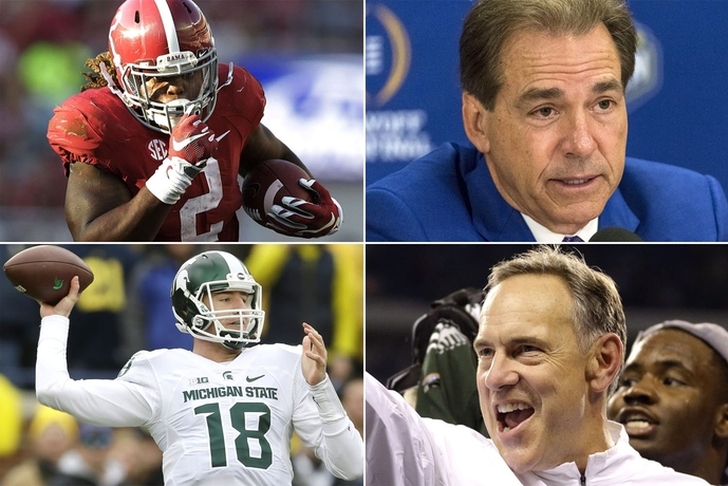 Compared to the fireworks from the first College Football Playoff semifinal in #1 Clemson's 37-17 win over #4 Oklahoma, the first half of the Cotton Bowl between the #3 Michigan State Spartans and #2 Alabama Crimson Tide would seem like a dud.

However, it's still been a fascinating first 30 minues as Alabama leads 10-0 after 30 minutes in a game that's been a trench dogfight rather than a shootout.

The teams combined for just 87 yards in a tense, scoreless first quarter. Neither defense gave an inch as the teams traded punt after punt. Things didn't get much more wide open in the first nine minutes of the second quarter as both defenses hunkered down in a stalemate.

However, Tide QB Jacob Coker would provide the first big play on offense of the game -- hitting WR Calvin Ridley for a 50-yard pass play down to the Michigan State 1 with six minutes left. Heisman Trophy winner Derrick Henry would punch it in from there, making it 7-0.

Connor Cook's bad night would continue on the Michigan State side, as he would be brought down for a big sack on the next drive. Alabama would take advantage after another MSU punt, with a 41-yard Jake Coker/OJ Howard leading to a 47-yard Adam Griffith field goal making it 10-0. It wouldn't get any better for the Spartans from there as they would get all the way to the Alabama 12 with seconds remaining before a Cook pass was intercepted by Cyrus Jones and returned to the Tide 22.