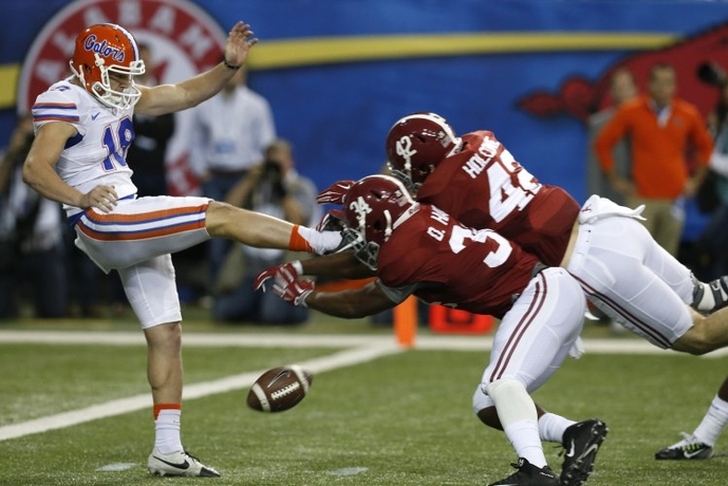 The Alabama Crimson Tide continued their reign atop the SEC on Saturday, winning their third straight conference title with a 54-16 victory over the Florida Gators.

The win pushes Alabama to a perfect 13-0 on the regular season, clinching a College Football Playoff berth as the only undefeated Power 5 Conference team - which all but guarantees that they will be the top overall seed in the playoff.

As has been the case all season, Alabama's defense led the way, coming up with two non-offensive touchdowns that changed the momentum of this game.

They also came into this game without having allowed a touchdown in four straight games, but Florida ended that on their first drive with a five-yard touchdown pass from Austin Appleby to Antonio Callaway. It looked like they had a chance after stopping Alabama on the ensuing drive, but the Tide then reeled off 16 straight points - despite only getting negative yards on offense.

It started with a field goal, then cornerback Minkah Fitzpatrick got a 44-yard interception return for a touchdown, which the Tide followed by blocking a punt and returning that for a touchdown.

From there, the Tide controlled the rest of the game, building a 33-9 lead after a six-yard touchdown run from Joshua Jacobs. Florida cut into that deficit as DeAndre Goolsby caught a 25-yard touchdown pass from Appleby right before halftime, yet two rushing touchdowns from Bo Scarbrough in the second half put the game away.

Alabama's defense limited Florida to 261 total yards, including zero rushing yards for the game. Appleby was the Gators' only offense, completing 26/39 passes for 261 yards, two touchdowns and three interceptions.

By securing the No. 1 seed in the CFP, Alabama should be playing in the Chick-fil-A Peach Bowl on Dec. 31.

For Florida, they finish the season with an 8-4 record and are likely to go to either the Outback Bowl or the Citrus Bowl.