Alabama vs. Auburn: Everything You Need To Know From The Crimson Tide's 29-13 Win In The Iron Bowl 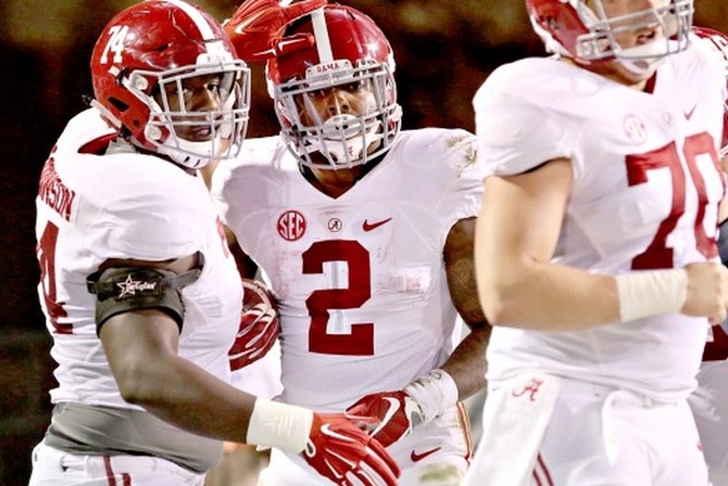 The Alabama Crimson Tide clinched the SEC West with a convincing 29-13 win on the road over the Auburn Tigers, putting themselves in prime position to make the College Football Playoff with a win in the SEC Championship Game. Here's everything you need to know from the game:

Alabama running back Derrick Henry set the school record for carries in a game, rushing 46 times for 271 yards and a touchdown. He now also has the school's single-season rushing yardage mark (1,526) and has rushed for at least one touchdown in 17 straight games.

Auburn's offense needs to find a spark next season. The Tigers have struggled all year despite head coach Gus Malzahn's usually productive system, and those struggles came to a head in this game. Auburn gained just 260 total yards and 12 first downs in the game.

Alabama has now won at least a share of the SEC West title for the fourth straight season and sixth time in the last eight years.

"I asked Derrick every time he came to the sideline, 'Are you OK?' He said 'I'm good coach, I'm going to win this game.'" - Alabama head coach Nick Saban on Henry's 46 carries.

"We will get a plan and we will get better, I guarantee that." - Malzahn on the Auburn's 6-6 record.

"I couldn't be prouder of a group of guys than I am of this team. This was tough game today, a really tough game. We expected it to be a tough game today. ... This was a great football game, a great rivalry. To win the west is an accomplishment." - Saban on the win.

Quarterback Jake Coker has what it takes to lead Alabama to a national championship. While he's definitely not the focal point of the offense, he's proven to be an extremely capable game manager and makes key plays when it matters. He scrambled for multiple first downs while showing some unexpected agility and didn't turn the ball over. He also completed at least 60 percent of his passes for eighth straight game, a show of the efficiency Nick Saban needs from his quarterback.

Will Muschamp has vastly improved Auburn's defense. The unit that was one of the worst in the country last year has continued to improve with each passing week this season, and was the only reason Auburn had any chance to win this game. They held a good Alabama offense to just 5/16 on third down, and routinely forced field goals instead of touchdowns. If the offense can figure it out next year, Auburn has a chance to be much improved next season.