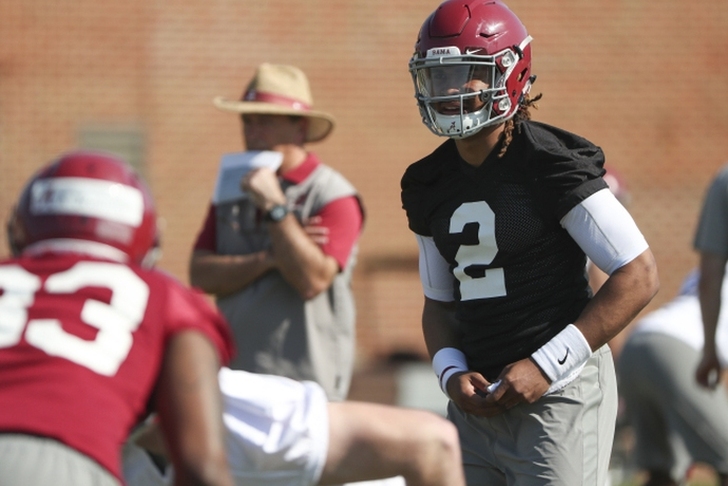 The Alabama Crimson Tide kicked off spring practice on Tuesday, and they're hoping it's the start of other dominant season. They will have to replace the abundance of starters that left for the NFL Draft, but that isn't something new for Nick Saban & Co. Here is all the latest Alabama news & rumors you need to know:

Jalen Hurts latest
The addition of five-star freshman quarterback Tua Tagovailoa had many people thinking that he would compete with last year's starter, Jalen Hurts, for the job this year, but that doesn't appear to be the case. Saban said on Tuesday that they are hoping Tagovailoa and fellow freshmen Mac Jones can turn into "adequate" backups.

"The other two guys who are freshmen, they're going to have to grow into being adequate backups by the fall," Saban said. "This is the least amount of experience we've ever had at quarterback, regardless of having a starter back. But I like all the guys, I like their attitude and I think they all three have a lot of potential to really be good players.

"I think that because we do have a starting quarterback coming back, it's easier for us to self-assess what we need to do for him, with him, to help him, to coach him so that he can develop in areas that would be helpful to him becoming even more of a complete player - mostly in the passing game. That's something that we're going to work hard on in the spring and also in fall. If he could do that and be sort of a dual-threat guy, I think it would be really, really difficult for defenses to defend him."

Hurts passed for 2,780 yards with 23 touchdowns and nine interceptions last year while rushing for 954 yards and 13 touchdowns.

Jonah Williams the new starting left tackle?
Another of the big questions surrounding Alabama's offense is who would replace left tackle Cam Robinson, and that appears to be sophomore Jonah Williams, according to Charlie Potter of 247sports.

Although I did not catch the entire offensive line yesterday, I was able to see rising sophomore Jonah Williams at left tackle with what appeared to be the first-team offensive line. That’s a move that many thought was possible following the former five-star prospect’s stellar first year in a crimson uniform and the early departure of three-year starter Cam Robinson.

It’s worth noting with all these observations that Tuesday was only the first of 15 practices this spring, and springtime is the best time for movement and experimentation. But seeing Williams at left tackle is something that wouldn’t be a shock to witness again in Sept. 2’s opener versus Florida State. Regardless, Williams will find himself in the Week 1 starting lineup.

“A University that is soon to be SEC Champions.” I'm sure that's going over well in Tuscaloosa.