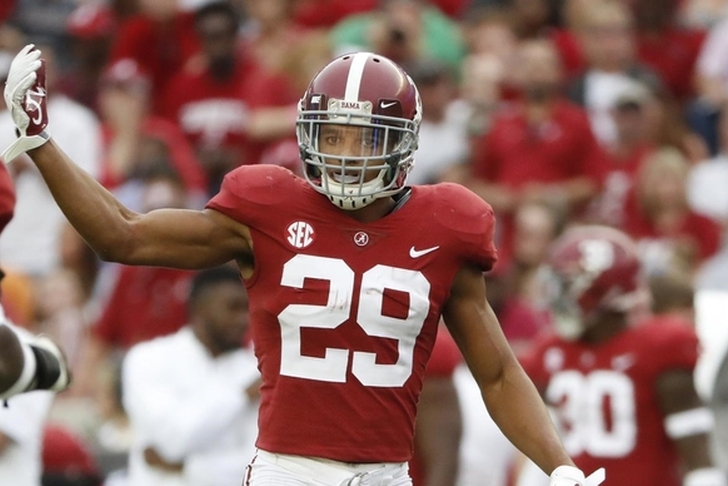 The Alabama Crimson Tide are the only team that has made the College Football Playoff every single season, and their reward for getting into the playoff this year - despite not winning the SEC - is a rematch against Clemson for the third straight season. There is obviously a ton of hype surrounding this game, but with early signing day this week, the Tide have also been hitting the recruiting trail hard. Here are the top Alabama football rumors you can't miss today.

I want to thank all my family, friends and coaches who’ve supported me and helped me get this far. After 4 years playing for Armwood High School I would like to announce that I’m taking my talents to Tuscaloosa. #RTR #813 pic.twitter.com/vydeqjgWYx

His top two choices were between Alabama and USF. The 5-foot-11, 195 pound running back is ranked the 559th best recruit in the country, according to the 247sports Composite.

Replacing Safety Hootie Jones
The only player to miss the first two postseason practices for the Crimson Tide has been safety Hootie Jones, and head coach Nick Saban said he is out for the season with a knee injury. Who will take his place?

In Saturday's practice, redshirt sophomore Deionte Thompson was playing in the place of Jones at safety. It remains to be seen if he will start against Clemson on January 1st, but junior safety Minkah Fitzpatrick said Thompson is definitely in the mix to replace Jones.

“I don’t know what we are going to do. I have been all over the place in practice since Hootie has been out. But we got a couple of guys stepping up, Deionte Thompson, Xavier McKinney, and Daniel Wright - they’ve all been doing their job and doing it well. I think it’s going to be something we probably decide next week so we can have more practice reps with it. That decision is going to be up to coach.”

Alabama has the SEC’s third-best passing defense entering the College Football Playoff, allowing an average of 163.7 yards per game. Whoever steps up for the Tide in this matchup will be tested right away against Clemson.

The Villains of College Football
Alabama's constant success over the past decade has made them one of the most hated programs in the sport, and Alabama cornerback Levi Wallace said the team relishes that role.

“We’re seen as the villain,” Wallace said. “I’m sure a lot of people don’t like Alabama because we’re always so good each and every year. That’s something Coach Saban has instilled in us. Trying to be the best we can be. Just being the University of Alabama, whatever you guys say we are, that’s what we are but we’re definitely the bad guys in college football.”

When you have been as dominant as Alabama has been over the last few seasons, it's understandable to think this way.