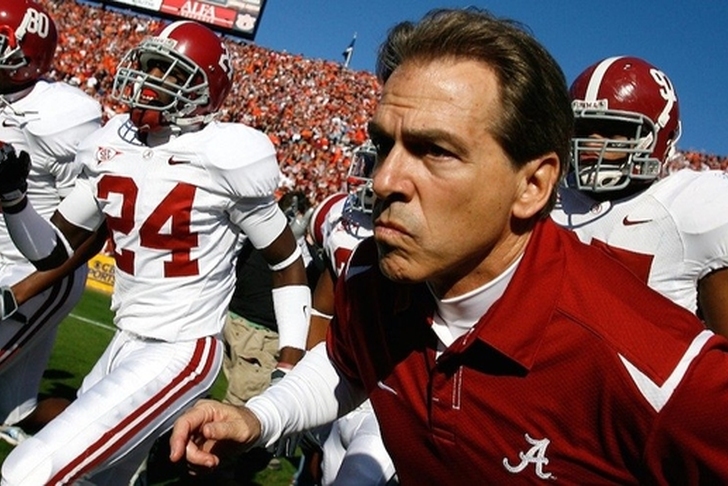 Early signing day is the fuel that gets this Alabama Crimson Tide rumors roundup article rolling. Alabama head coach Nick Saban has turned the Tide into a juggernaut ever since taking over the program in 2007, with recruiting playing a major, major role in that sustained success. Alabama has reeled in a top three overall recruiting class every year since 2012 and is laying the foundation for another top class in this early signing period.

Here are the recruiting rumors from a thrilling early signing day you won't want to miss.

The Early 15
The Crimson Tide exploited the early signing period by adding 15 players to its team on Wednesday.

The biggest announcement for the Tide on Wednesday was when 5-star defensive end Eyabi Anoma announced that he was committing to Alabama over Maryland and Michigan.  The 6-foot-5, 230-pounder is ranked as No. 7 overall prospect in the country and the No. 2 weak-side defensive end, according to the 247sports composite. Anoma is the first 5-star recruit of Alabama's 2018 class.

Alabama has signed 15 players and as of now has eight slots remaining under the 85-man scholarship limit.

Recruiting Ranking
According to 247 Sports composite right now, Alabama has the No. 6 recruiting class in the country entering 2018, and Saban was happy about the 15 players that signed on Wednesday.

“We’re very pleased and happy with the 15 players we were able to sign,” Saban said. “I think these signees today represent a lot of hard work. The coaches did a good job. A lot of our players, the team we have here at Alabama, the academic folks, when these guys visit, our administration, all did a very good job. We’ve kind of identified our needs and hopefully, we’ll be able to finish with a lot of good players who are left out there that are going to wait until February or maybe sign in the next two days, but we really can’t comment on that.”

If Saban is happy, then the Crimson Tide faithful should be happy, despite the recruiting rankings. This class should keep Alabama football at the top of the SEC for years to come.

Going To Georgia
It wasn't all roses for the Crimson Tide on Wednesday as cornerback Nadab Joseph decommitted from Alabama and flipped to Georgia. Joseph is a 4-star recruit and the nation’s No. 18 cornerback.

Even though Joseph flipped from Alabama to Georgia, the Crimson Tide still signed three defensive backs. They are also pursuing three  5-star defensive backs in Tyson Campbell, Patrick Surtain Jr., and Isaac Taylor-Stuart during the next signing period.