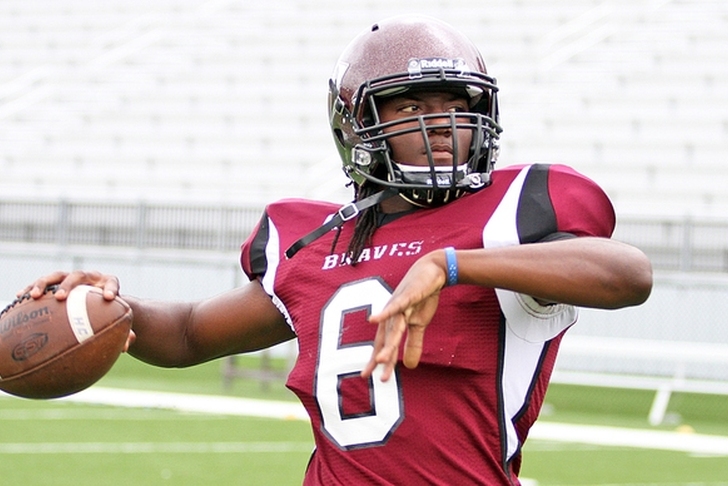 The Alabama Crimson Tide are in the midst of spring practice, but that hasn't done anything to stop their momentum on the recruiting trail. In fact, Nick Saban & Co. have actually ramped up their efforts. Here are all the latest Alabama recruiting news and rumors you need to know:

Ohio State QB commit still interested in the Tide
Four-star quarterback Emory Jones (Franklin, GA) has been committed to Ohio State since July and insists he is "110 percent" solid on that commitment. However, he is still taking visits and went to Alabama two weeks ago, according to Chris Kirschner of SEC Country.

Jones trekked to Tuscaloosa on March 25, shortly after receiving an offer from the Crimson Tide. This was Jones’ first time meeting with Nick Saban and offensive coordinator Brian Daboll. Jones said Daboll’s experience watching Tom Brady close in person over the past several years is intriguing to him.

“The biggest thing I took away from him is how he can develop me for the next level seeing how he just came from there,” Jones told SEC Country. “He obviously knows a lot of things about the NFL and could help me get there. He’s watched Tom (Brady) closely for the past several years. He can take what he’s seen from him and help other quarterbacks.”

“It will take a lot for me to de-commit from Ohio State,” Jones said. “It would have to be like a major coaching change like Urban (Meyer) leaving or something.”

The 6-foot-3, 195-pounder is ranked as the No. 2 dual-threat quarterback and No. 27 overall prospect in the country in 247sports' Composite Rankings.

“It went good. It was my first practice seeing them,” he said. “I loved the way they practiced. Me and Coach (Karl) Dunbar have got a real good relationship. It was good seeing him, too.”

Miller grew up an Alabama fan, but said he "can't let that play into my decision." However, the Tide are one of his leaders, along with Auburn, Florida and LSU.

4-star WR not interested in Alabama despite offer
Brennan Eagles, a four-star wide receiver from Houston, TX, posted a list of his top 10 schools in February, of which the Tide did not make the cut. He received an offer from Alabama at the beginning of March, but reiterated that they are not on his list.

"I don’t have interest in Alabama anymore," Eagles told 247Sports' Garrett Callahan. "Something had happened and they offered me extra late."