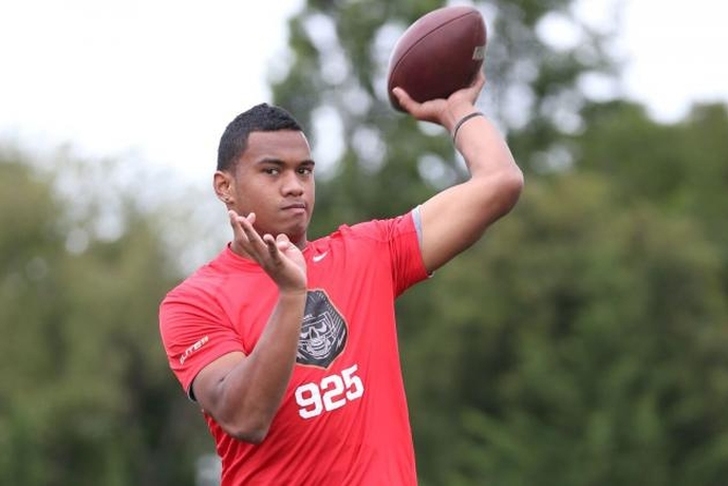 "I was impressed, probably most impressed with him,” Whitfield told 247Sports’ Luke Stampini. “You know, you watch him on film and get an idea then you can’t wait to see how real is that.

“Here it’s not just like a camp where kids just came. This is like a shark tank. Through a very rigorous process, a thousand plus quarterbacks evaluated, two dozen drop in here and he outshines the two dozen. It just feels like Coach (Nick) Saban and the Tide got a steal, which is weird that they would steal something, but they got a steal with him.”

Tagovailoa went 12/13 passing for five touchdowns in 7-on-7 on Sunday, causing him to stand out from the rest of the group. Whitfield explained what makes him special:

“He does a real nice job of processing, which to me means at the same time you can see something you can slow down the mechanism of what’s going on around you. Then when he gets the understanding of what it is, he’s decisive about making a move, making the throw, and he just throws with conviction – just impressive.”

Tagovailoa is ranked as a the No. 2 dual-threat quarterback and No. 61 overall prospect in the country.

Tide offer JUCO CB, the favorite to land him
Alabama offered a scholarship to JUCO CB Jhavonte Dean (Blinn College) on Sunday, which put them right at the top to land him.

"They told my coach about the offer and then followed me on Twitter," Dean said, via 247sports. "I never thought I would get Alabama. That was a wake up call. That shows me that I can really play anywhere.

"Based on how successful they've been I would say they moved up to the top. UCF has been hitting me up a lot. They are hitting me hard. Cincinnati has been with me since day one. I also like Utah and want to visit there."

The 6'2", 180-pounder has two years of eligibility remaining.

Jalen is the younger brother of incoming Alabama freshman Jared Mayden, and has already received offers from nine schools - though Alabama isn't one of them. He plans to visit Tuscaloosa on June 13.