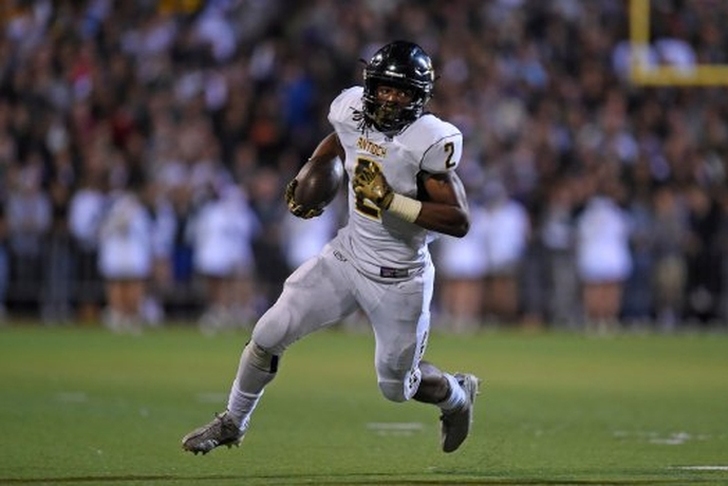 The Alabama Crimson Tide have a long layoff as they prepare for the Peach Bowl, and some that time is devoted to recruiting. The recruiting dead period is now, but several recruits are making their decisions in the coming days. That means there's plenty to get to around Alabama football recruiting. Here are all the latest Alabama recruiting news and rumors you need to know.

Will Harris flip his commitment?
Alabama commit Najee Harris, the top overall prospect in the country, has been committed to the Tide since April 2015, but has been recruited heavily by Michigan. Harris hasn't flipped his commitment to the Wolverines, but Steve Wiltfong of 247sports believes the Wolverines have at least pulled even with Alabama for the five-star prospect.

I certainly didn’t expect to get to a point where I thought Michigan had a chance to flip long-time Alabama commit and the nation’s No. 1 recruit per the industry-generated 247Sports Composite in Najee Harris.

But I’m getting there now.

That’s not a prediction that the Wolverines will pull off the greatest heist in the 2017 recruiting cycle, yet it could become a reality.

Harbaugh and boys in the Maize and Blue have done everything they can to be in this position. Among the highlights include...

- Harbaugh made a visit very early in the process to see Harris at his school.
- This summer Michigan hosted a satellite camp at Antioch (Calif.) High, where Harris rushed for 7,948 yards and 94 touchdowns during his prep career to get more time around him.
- With his trainer working the event, Harris also attended the Wolverines satellite camp in Utah to get even more time around Harbaugh, Tyrone Wheatley and the others.
- Harris then attended the Barbecue at the Big House in the summer with his mother and some coaches. That was certainly a positive experience.
- This past weekend Harris and his mother returned along with an uncle in giving Michigan his final visit, taking an official to A2 where he was surrounded by just about all of the Wolverines commits and a couple more top targets including five-star receiver Donovan Peoples-Jones. Harris has a feel for all the people he'll be around if he chose Michigan.

With that, Michigan has given Harris plenty to ponder and one source said Wednesday he doesn’t think the U.S. Army All-American is sure of his final decision.

Harris is an early enrollee, so he will make a final decision in the coming weeks.

Tide to get official visit from 4-star WR
Four-star wide receiver Devonta Smith (Amite, LA) has been quiet about his recruitment during the fall, but now that his senior season is over, he is planning to make two official visits - one to Alabama and one to Miami.

Smith decommitted from Georgia in January, and the Tide have been the favorite ever since. The 6-foot-1, 160-pounder is ranked as the No. 9 wide receiver and No. 57 overall prospect in the country.

Mac Jones solid on commitment
Four-star quarterback Mac Jones (Jacksonville, FL) committed to Alabama in June, and remains solid on that commitment after the Tide hired Steve Sarkisian to be their offensive coordinator.

“I’m excited about it,” Jones told 247sports. “I don’t really know him that well. I haven’t met him or anything. I don’t think he was allowed to talk to the recruits last year. I’ll get to know him. I know he’s done a good job with quarterbacks. It seems he’s a really good quarterbacks coach, so that’ll be good to have a good offensive coordinator but someone who can correct you individually more than maybe some other coaches have done in the past. That’s what Coach (Nick) Saban told me. He said the guy knows what he’s doing and he thinks he’s a better quarterback’s coach than they’ve had in the past.

"In terms of my time period I really feel comfortable at Alabama. Official visit-wise, I only have Alabama set up. Originally I was probably going to go to maybe Kentucky. Really, Alabama is the only official I have set up. I’m listening to people but I just like what I hear from Alabama and the opportunity I have there. I feel pretty comfortable there.”