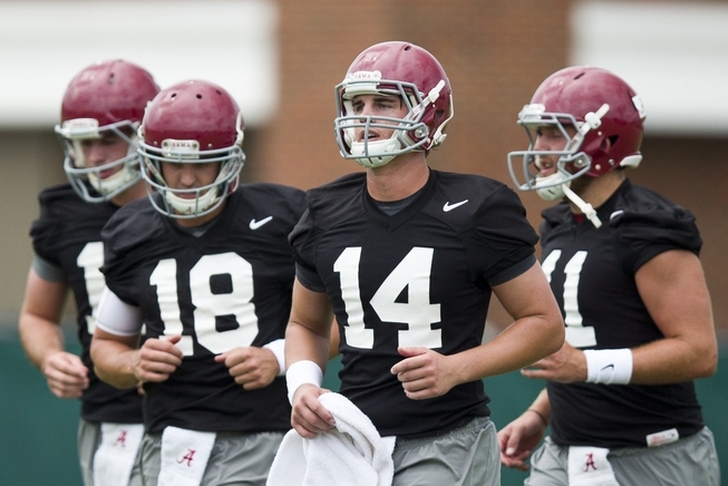 For those who are penciling in FSU transfer Jacob Coker to finally get his moment in the sun and take over the reins as the Alabama Crimson Tide starting quarterback, you might want to put that assumption on hold for the time being. Redshirt junior Alec Morris is on the rise.

Via Robby Kalland of CBS Sports:

"According to AL.com, it is Morris, not Coker, who leading the competition after the Tide's second scrimmage of the fall on Saturday. Former Alabama quarterback Greg McElroy, now an analyst for the SEC Network, called Morris a "sleeper" in the competition on Paul Finebaum's radio show Monday."

Nick Saban made it clear that he was disappointed about the state of the QB competition after the program's first scrimmage, but he had some very complimentary things to say about Morris recently.

"Alec has done a nice job all [preseason]," Saban said to reporters. "I think he does a really good job of understanding the offense. He helps the other players play better. And I think that he has probably shown command at the position, which I think is important. We've just got to continue to work on touch, accuracy, efficiency. But I've been really pleased with what Alec has done in this camp."

Redshirt sophomore Cooper Batemen is also hanging out on the periphery of the competition after throwing a team-high 27 passes in this past Saturday's scrimmage. However, it appears it's currently Coker vs. Morris with Coker losing some ground after a three-day absence due to a toe injury.

"Jake missed three days in practice this week, so the other guys got a few more reps during the course of the week," Saban said. "But I thought he did a decent job today taking that into consideration."

However, while Morris may be leading at the current moment, there's really no telling just how this battle is going to shake out just yet. In fact, if Saban and offensive coordinator Lane Kiffin can't decided on an outright #1 by the end of camp, Coker and Morris (and perhaps Bateman may split snaps during the team's September 5th season opener against Wisconsin.