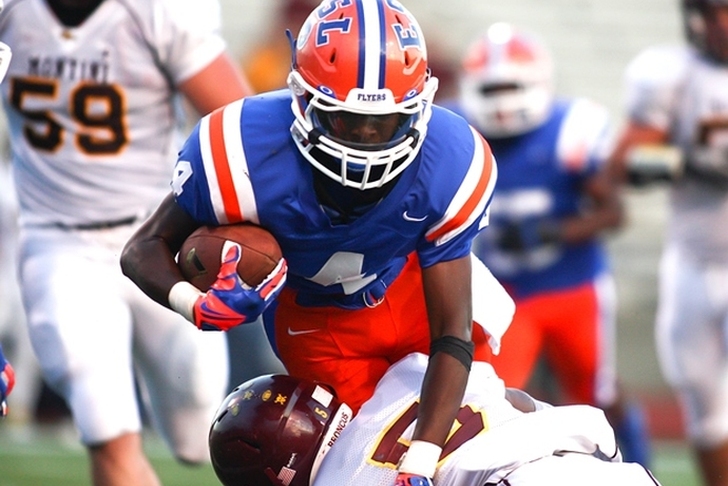 The college football season doesn't start for roughly two months, giving the Alabama Crimson Tide plenty of time to focus on recruiting. Alabama has turned up the heat on the recruiting trail during the offseason, and it's already paid off with 15 commitments. But the Crimson Tide are far from done. Here are the latest news and rumors surrounding Alabama football recruiting.

Tide In The Lead For Four-Star WR
Jeff Thomas is a four-star WR from Illinois. He's also the No. 9 WR and No. 62 overall recruit in the country. And he told 247Sports that Alabama is the current front-runner for his services. Miami is only other notable threat, Thomas said, and he's a big fan of Alabama's campus. Thomas is small, checking in at just 5-foot-10, but can fly.

Alabama Pushing For Nico Collins
Collins is a four-star WR and the No. 76 overall recruit according to 247Sports. The Crimson Tide are making a push to get Collins to stay in-state.

"He tells me I’m a big priority for them," Collins told 247Sports of his talks with WRs coach Billy Napier. "The receiver board, a big-sized receiver like me playing on the outside the x position, he’s saying he has a lot of big plans for me if I come. He really wants me to come, he’s saying how he could use me in different ways."

Collins is the top ranked prospect in Alabama, but Michigan is Collins' No. 1 at the moment. Georgia is also making an effort to lure Collins.

No. 3 TE To Visit
Josh Falo is the No. 3 TE in the country and a four-star recruit. The California native has plans to visit Alabama on July 17th.

"[They're] just saying don’t do nothing dumb, don’t commit or anything till I visit out there," Falo told 247Sports. "They’re starting to use their tight ends a lot, that’s one thing that has my eyes more open about them."

However, it's Oregon that is the favorite to land Falo. Still, Alabama will get a chance to make its pitch shortly.