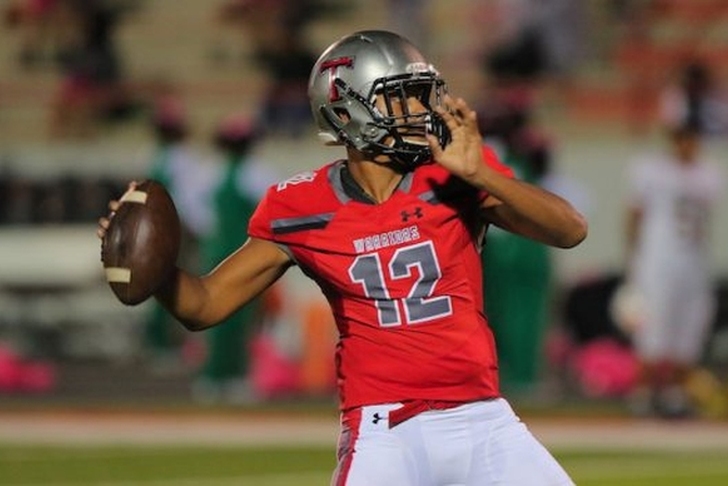 Alabama starting quarterback Tua Tagovailoa's younger brother, Taulia, is one of the top quarterback prospects in the 2019 class, and the Crimson Tide are going hard after him.

However, even though four-star quarterback Paul Tyson (Trussville, AL) has already committed to the Tide, Tagovailoa's father says that has no impact on Taulia's recruitment.

“We’re so supportive of Paul’s family and what they have done at the University,” Galu Tagovailoa said. “Prior to us coming here we’ve heard so many good things about the Tyson kid over at Hewitt. (Thompson head coach) Coach (Mark) Freeman speaks so highly about their family. The coaches at Alabama speak so highly about him. We haven’t met him personally, but he looks like such a good kid, such a respectful kid from what I see. We’re happy for them, and I don’t want to say it in a cocky way, but it doesn’t affect how Taulia feels (about Alabama). He enjoys the process right now. He’s still looking at other schools. But it has no effect on him with what’s going on. At the same time we’re so, so happy for the Paul’s family and we want to support them, too.

“Taulia is going to make a decision hopefully before the season starts. That’s what we want because he wants to do the same thing as his brother. He doesn’t want to give any coaches any false hope on what’s going to happen. Once we sit down and talk about what he wants to do, we’ll move forward with that. Right now we’re concentrating on his training and his school because he wants to enroll early.”

Tyson is legendary head coach Bear Bryant's great-grandson, and as such, it should come as no surprise that Alabama landed him - but it hasn't damped their enthusiasm about Taulia as a prospect.

Taulia is keeping his recruitment open but it's no surprise that Alabama is considered the heavy favorite to land him as well. He is ranked as the No. 6 pro-style quarterback and No. 178 overall prospect in the country.

Tyson is ranked the No. 7 pro-style passer and No. 222 overall prospect in the country, according to 247sports.