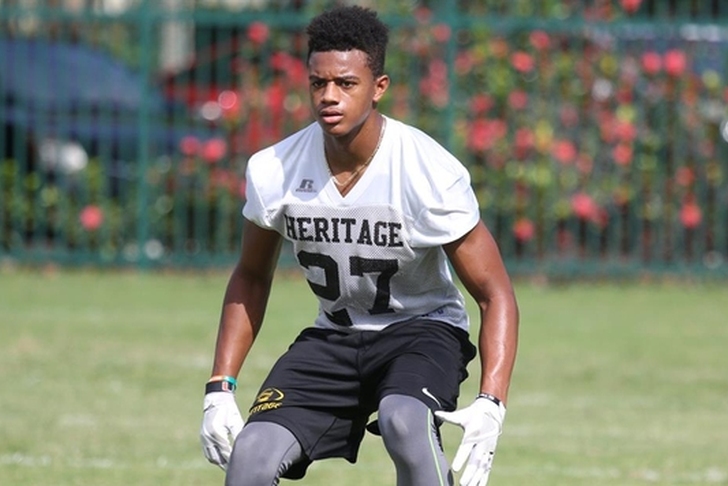 The Alabama Crimson Tide offered five-star cornerback Patrick Surtain Jr. (Fort Lauderdale, FL) a scholarship back in 2015, and they continue to ramp up their efforts to land him.

According to Hank South of 247sports, Alabama and Surtain talk "often" with head coach Nick Saban heavily involved in the Tide's efforts.

“I talk to Coach (Nick) Saban often, and Coach (Jeremy) Pruitt,” Surtain said. “I’ve been there sophomore year. Hopefully (I’ll get back) this summer.”

Pruitt stopped in at American Heritage earlier this spring to checkup on Surtain, and his teammate and fellow Tide target Tyson Campbell.

“Very hard,” Surtain said of the push Alabama is making. “They tell me how after this year they’re losing a great amount of DBs, so that’d be a great opportunity for me to step up.”

Surtain gave a few standout features he sees when looking at Alabama.

“Great program, they’re national championship-bound every year,” he said. “They’re great coaches; the amount of players they produce in the draft. They’re players get fully developed and ready for the league.”

Surtain is known to be placing on emphasis on choosing a school where he can play early and a place where he has "trust in the coaches." The Tide certainly fit the mold in both areas.

LSU is thought to be leading for Surtain, though Clemson, Florida State and Ohio State join Alabama as the biggest threats to the Tigers.

The 6-foot-2, 181-pounder is ranked as the No. 1 cornerback and No. 4 overall prospect in 247sports' Composite Rankings.