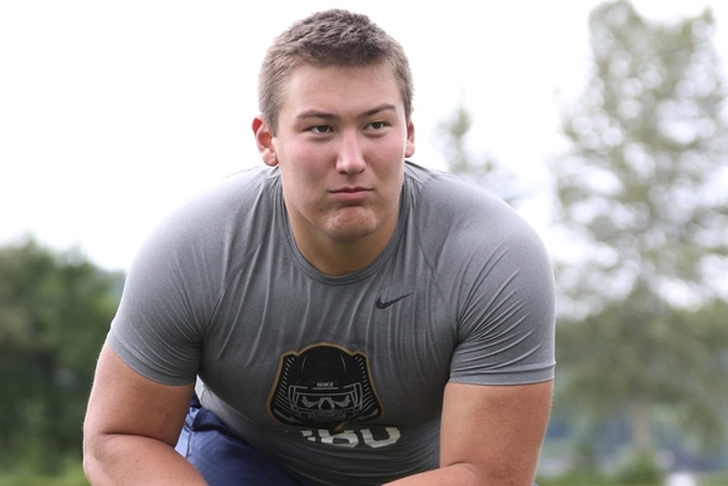 The Alabama Crimson Tide have just three games left in the regular season, but that doesn't mean they've slowed down on the recruiting trail. In fact, the Tide's 2017 class already ranks No. 2 nationally with 21 commitments. Here are all the latest Alabama football recruiting news:

Nation's top recruit uncertain about visit
247sports ranks offensive tackle Foster Sarell (Graham, WA) as the top recruit in the country, and Alabama has been hot on his trail for some time. However, according to Hank South of 247sports, it's uncertain if Sarell is going to make an official visit to Tuscaloosa or not:

It's been expected that five-star offensive tackle Foster Sarell would officially visit Alabama for the Iron Bowl at the end of the month. At one point Sarell, the No. 1 overall player in the country per 247Sports, was planning to make the trip from Washington for the Texas A&M game before changing back to his original plan of the Iron Bowl. However, it's not a done deal that the trip will actually end up happening. "It's not confirmed because we don't know if Foster will have a playoff game," Sarell's mother Pam tells BamaOnLine. "But if his team loses out the next couple weeks we will see about it happening." The Graham-Kapowsin product is currently trending to Washington at 59 percent on the 247Sports Crystal Ball.

Alabama to flip FSU commit?
Four-star safety Daniel Wright (Fort Lauderdale, FL) committed to Florida State in June, but that hasn't deterred Alabama from recruiting him. In fact, Wright said it has only caused them to ramp up their efforts.

"They came even harder after that," Wright told Drew Champlin of AL.com. "It was crazy. As soon as I committed, the same day, coach (assistant Mario Cristobal) was already hitting me up and letting me know that they were still on me. That showed me a lot. It's really going crazy right now, but I'm just taking everything as it goes.

"I've been hearing great things about the school. The tradition they have there speaks for itself. Coach Nick Saban is one of the best coaches I've ever seen do it. He's been building the foundation that's been great and been known for years. Time just came and everything just started opening my eyes about seeing the school and how should I go there. Everybody down here loves Alabama."

Wright is making an official visit to Alabama this weekend. The 6-foot-1, 187-pounder is ranked as the No. 14 safety and No. 123 overall prospect in the country.

Gibbs high on Alabama
Four-star safety Deangelo Gibbs (Loganville, GA) is one of the most sought-after prospects in the country, yet a late push from Alabama has pushed them in front and are now the favorite to land him, according to Hank South of 247sports.

What was once a Georgia-Tennessee battle to land four-star safety Deangelo Gibbs has quietly turned into more Nick Saban vs. Kirby Smart. Alabama certainly wishes to add more to its defensive backfield for 2017, with a number of names thrown into the hat at safety. It’s Gibbs’ name as of late – since his official visit to Tuscaloosa for the Texas A&M game -- that is picking up more and more traction in favor of Alabama. One source close to the nation’s No. 3 safety, per the industry-generated 247Sports Composite, tells BamaOnLine that the Tide will have work to do on his family, but that UA is “very much” in it. Gibbs, a product of Loganville (Ga.) Grayson, has family ties to both Georgia and Tennessee. Expect him to get back on campus in Tuscaloosa at least one more time before December.

Gibbs is ranked as the No. 3 safety and No. 41 overall prospect in the country.