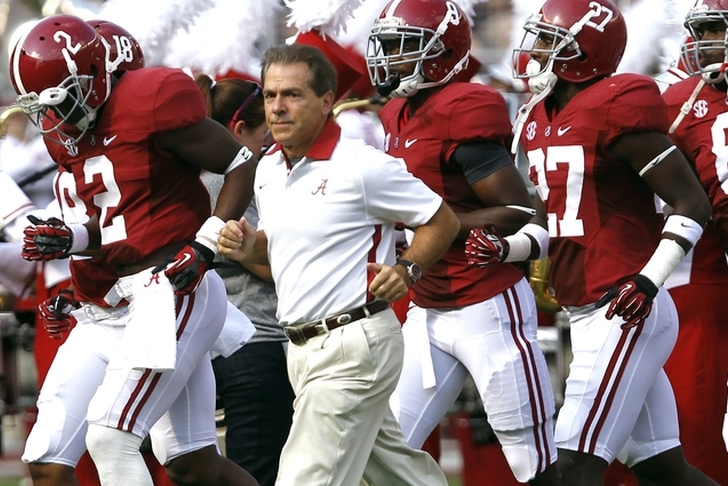 Spring practice is rapidly approaching for schools around the country. The Alabama Crimson Tide start their spring practice in less than a month. While that has the attention of the coaching staff, recruiting is a never-ending process. Alabama head coach Nick Saban and his coaching staff are already hard at work putting together the pieces of the 2017 recruiting class.

We're here to detail the three most interesting stories on the wire right now with our Alabama Football Pre-Spring Practice Recruiting Rumors Roundup For Feb. 19th.

Five-Star OT Puts Bama In Top 5
OT Isaiah Wilson is a five-star recruit and the No. 16 overall recruit. He told 247Sports that his top five schools are, in no particular order, Michigan, Alabama, LSU, Georgia and Ohio State. Wilson is the top recruit from New York and said Alabama's tradition was a big reason why he's interested in the Tide. The Wolverines are the only school from that group Wilson has visited and they are the current favorite.

"[Saban] says he liked how I could play both sides of the ball," Dallas said. "He said I could be like Cyrus Jones, and I thought that was ironic since he wears five and I wear five ... As a high school athlete and a player who respects the game of football, it means a lot with how much he has accomplished. He’s a very prestigious coach. Him just giving me all those compliments and even with the offer, that’s pretty big on my memory list right now."

Dallas has set a commitment date as well. He'll make his decision on Dec. 12th, allowing him to enroll early. For more Alabama coverage, download the Chat Sports Android and iPhone app.

Crimson Tide Offer No. 1 RB & QB For 2018
The recruiting process is never limited to just the coming season. While Alabama's priority is the 2017 class, the Buckeyes are keeping their eye on the 2018 class. That includes both the top-ranked QB and RB. 247Sports reports the Crimson Tide offered both the No. 1 RB and No. 1 QB for the class of 2018 Thursday. RB Zamir White is rated as the No. 2 overall recruit by 247Sports, while QB Trevor Lawrence is the rated as the best player in the country for 2018.