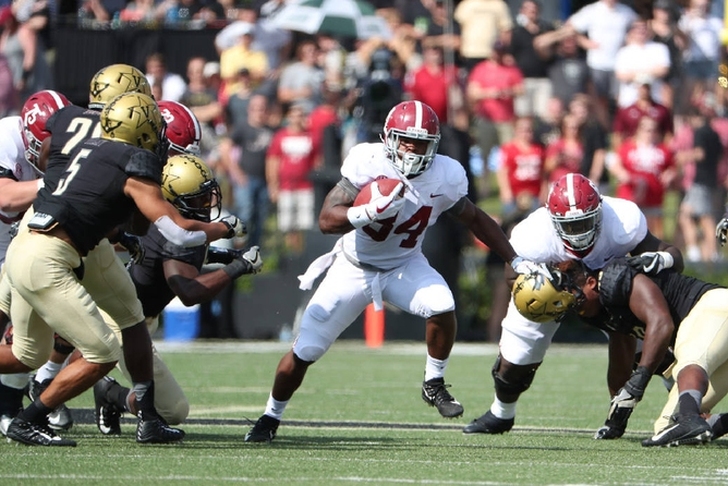 The Alabama Crimson Tide wrapped up a very successful Early Signing Period last week and are putting the final preparations in place for their upcoming playoff showdown against the Clemson Tigers. However, the team is still focused on recruiting along with trying to get one of their running backs more involved. Here are all the latest news & rumors you need to know:

Damien Harris not concerned by lack of carries
Harris is Alabama's starting running back and led the SEC this season with 8.24 yards per carry, yet he only received six carries in the Tide's loss to Auburn. In fact, he only got double-digit carries in one of Alabama's last six games - but Harris isn't worried about his workload.

“When you have the trust and the faith and the belief that the coaches are going to do whatever’s best for our team, then it’s not really hard to not question what’s going on,” Harris said. “It doesn’t really matter what people think, who should get the ball, what we should run on offense.

“I mean, no offense, but I think (head) coach (Nick) Saban knows what he’s doing. He’s been here building this for a while and he’s had a lot of success.”

Alabama has four running backs that see consistent carries in Harris, Bo Scarbrough, Najee Harris, and Josh Jacobs, along with quarterback Jalen Hurts' rushing ability. Because of that, Saban said they don't plan to change their gameplan in that regard.

“There’s still only one ball, and we’re only going to run the ball so many times. We’re going to have a plan for how we want to play the guys in the game,” Saban said. “The guys that are playing well in the game usually get to play a little bit more and maybe they get a few more touches. We certainly have four guys that we’ve tried to have a play for and three of them have played pretty extensively and all made a significant contribution this year. We want them to continue to do it.”

Harris leads the team with 906 yards and 11 touchdowns on 110 carries this season.

Alabama targeting a quarterback before late signing period
Alabama signed 15 players during the Early Signing Period, and with their work on those prospects done, Saban said the TIde are turning their focus on landing a quarterback in the spring.

"We have tried to recruit a quarterback and we're going to continue to try to do that," Saban said. "If we can get somebody that we feel can be a positive in the organization, we would like to get a quarterback. I would always like to have four on the roster. That may or may not be possible. We'll have to make that decision based on how recruiting continues to go."

The Tide currently have three quarterbacks on their roster in Hurts, who is a sophomore, and true freshmen Tua Tagovailoa and Mac Jones.

2019 4-star CB hoping to visit Alabama in spring
Elsewhere in recruiting, Alabama is going hard after four-star cornerback Tyrique Stevenson (Homestead, FL) in the 2019 class, and he's hoping to make an unofficial visit to Tuscaloosa this spring.

Stevenson previously visited Alabama last summer for a camp, which he called "a great experience just getting coached by one of the greatest DB coaches out there."

The 6-foot, 175-pounder is ranked as the No. 19 athlete and No. 200 overall prospect in the country, according to the 247sports Composite.