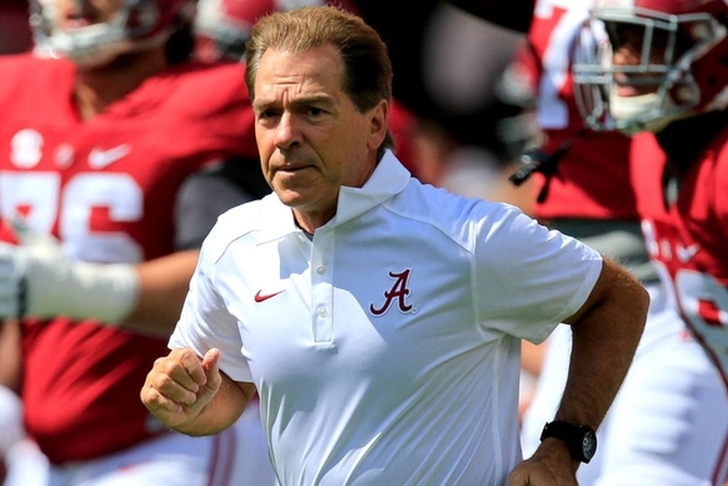 The Alabama Crimson Tide made THE statement victory of the day with a dominant 38-10 blowout victory over the Georgia Bulldogs, putting themselves back in the College Football Playoff picture.

A heavy rainstorm made its impact on the game from the opening kick as both sides played a sloppy opening 20 minutes with the scored just 3-3, but then the Tide really turned on the pressure.

Star running back Derrick Henry rumbled for a 30-yard TD through the Georgia defense, then the Tide blocked a punt they returned to the end zone, which was followed by a 45-yard TD pass from the Jake Coker to wideout Calvin Ridley just one minute later. In the blink of an eye, a nail-biter turned into a total rout as Alabama led 24-3 at halftime.

Georgia tried to get going on their first drive of the second half, but Eddie Jackson quickly put an end to that by returning an interception 50 yards for a touchdown. From there, 'Bama had it on cruise control as they coasted to an easy victory.

Bulldogs running back Nick Chubb did tie Hershal Walker's school record for most consecutive games with over 100 rushing yards, but that doesn't tell the story of how Alabama limited him as 83 of his 146 yards came on a long touchdown run when the Tide were already leading 38-3. Alabama's defense stacked the box all afternoon long to limit Chubb to force UGA's passing attack to beat them - and neither Greyson Lambert or Brice Ramsey couldn't make them pay. Other teams will look to this as the blueprint for how to stop Georgia's offense.

As for Alabama, the biggest question mark coming into this game was how Jake Coker would play under center since he had been inconsistent all season, but he played his best game to date, completing 11/16 passes for 190 and a touchdown to go along with 23 rushing yards and another socre without turning the ball over. Alabama has been looking for reliable quarterback play since the start of the season, and if Coker can keep up this level of play, the Tide suddenly become a very, very dangerous team.