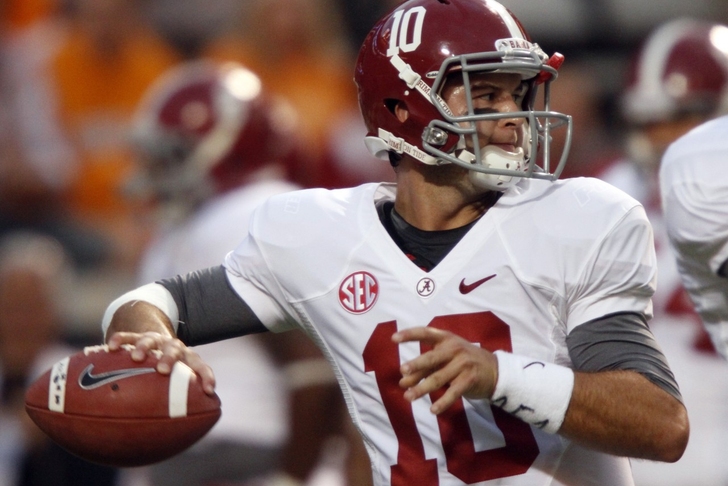 AJ McCarron is finally starting to shed the "game manager" label that's followed him throughout his entire Alabama career. McCarron has steadily climbed up draft boards from the later rounds, and there are some scouts and experts now suggesting he could be one of the first quarterbacks chosen.

One AFC scouting director had this to say about McCarron's NFL potential:

"Good size, outstanding touch on all throws, can make all the throws but only has average arm strength. Average running ability but very good feet and movement in the pocket to avoid sacks. Outstanding progression-read quarterback, makes throws to his second and third reads consistently. Doesn't turn the ball over. Winner. Mentally tough. Has the moxie and cockiness most great QBs have. Very similar to Tom Brady in stature, athletic ability, arm strength, touch and the most important category -- wins."

That's right - very similar to Tom Brady. While opinions on McCarron's NFL prospects still vary, the only real negatives any scouts or analysts have noted are his lack of mobility and his lack of arm strength. Hmm, where have we heard that before? Oh yeah, Tom Brady's pre-draft scouting report 13 years ago:

Is not what you're looking for in terms of physical stature, strength, arm strength and mobility, but he has the intangibles and production and showed great Griese-like improvement as a senior. Could make it in the right system but will not be for everyone.

Before anyone gets too carried away, we aren't saying AJ McCarron is the next Tom Brady - he could end up playing in the CFL in two years, for all we know. Still, there are some interesting similarities in the pre-draft reports for both players, and it'll be very interesting to see how McCarron develops at the next level.