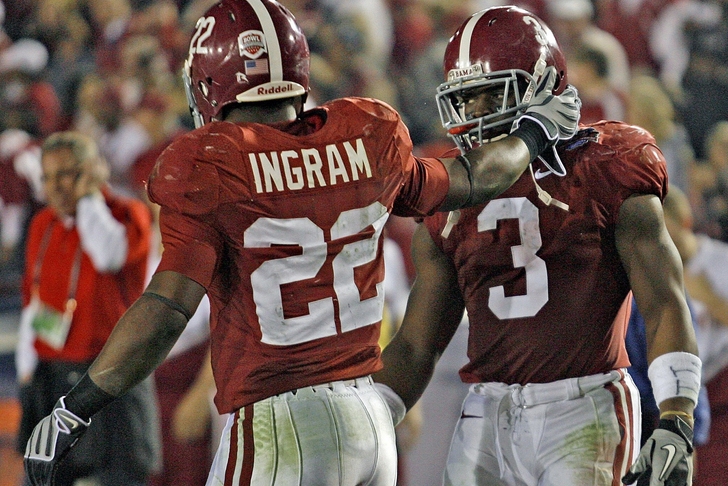 The Alabama Crimson Tide are one of the few traditional powers in college football, and they've had a surplus of great players come through Tuscaloosa. However, they're known for having the most successful running backs at the college level because of how many excellent rushers they've had over the years. Who's the best that has ever carried the rock for the Tide? Here are the top 5 running backs in Alabama history:

Richardson's NFL career has become a punchline, but there's no mistaking how dominant he was at Alabama. His combination of power and speed allowed him to become the school's first winner of the Doak Walker Award for the nation's best running back, and his junior season (1,679 yards, 21 touchdowns) is one of the best in school history.

Musso was a two-time first team All-American and had two straight 1,000-yard seasons - one from the I-formation, and one from the wishbone. He was the school's all-time leader rusher until his record was broken by...

Humphrey is perhaps the most explosive running back in Alabama history, but didn't reach his full potential because of injuries. He ran for 2,726 yards during his sophomore and junior seasons, the most by an Alabama rusher in two consecutive seasons, but a foot injury in his senior year kept him from pushing the career rushing record to a point that would never be reached.

Alexander won SEC Player of the Year and guided the Tide to a SEC title in 1999 while rushing for 1,383 yards and scoring 24 total touchdowns. He's also Alabama's all-time leading rusher with 3,565 yards.

Ingram has had modest success in the NFL but he holds a special place in Alabama football history as he's the only Heisman trophy winner in school history (2009). He ran for school-record 1,658 yards that year, ranks fourth on Alabama's all-time rushing list with 3,261 yards (in just three years), and holds the school record with 42 rushing touchdowns.