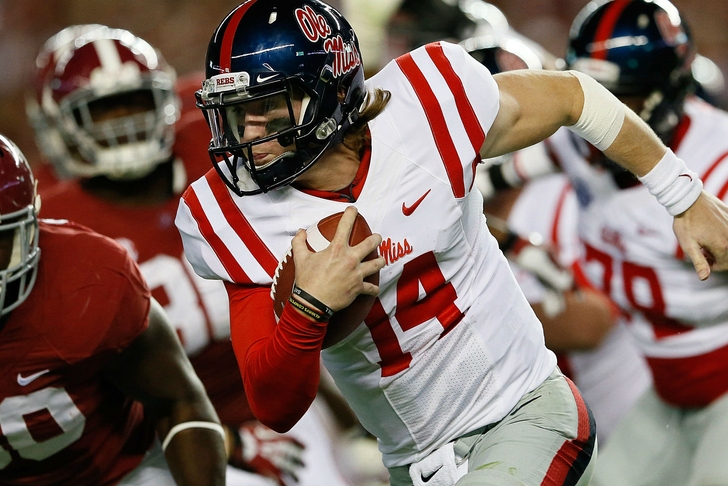 In an absolutely wild SEC showdown, Ole Miss shocked Alabama 23-17 to move to 5-0 on the year.

The second half started with the Rebels trailing 14-3 - although the first half had been a fairly even defensive struggle, a late fumble return for a touchdown (possibly helped by a missed face mask call) gave Alabama the edge.

The third quarter saw Ole Miss pull within four after a Laquon Treadwell touchdown catch by way of Bo Wallace, but the Tide extended the lead to seven after an Adam Griffith field goal (his first make of the day after two first-half misses).

In the fourth, the Rebels offense finally found a groove, and Wallace connected with Vince Sanders for a 34-yard TD to tie things up at 17. Alabama's Christion Jones then fumbled the ensuing kickoff, giving the Rebels the chance to take their first lead since 3-0. Bo Wallace was able to find the end zone with just under three minutes left, but the extra point was blocked, giving Alabama the chance to win with a touchdown on their final drive.

The Tide moved the ball well...but Ole Miss finally made Blake Sims pay for a risky throw. Senquez Golson intercepted Sims in the end zone with :37 remaining, icing the upset win for the Rebels.

Turning Point: This was anybody's game until Christion Jones fumbled the ball on a kickoff return after Ole Miss tied the game at 17. The fumble gave the Rebels the ball at the Alabama 31, and they were able to ride that momentum to a huge upset win.

Alabama MVP: After Kenyan Drake went down with what looks like a season-ending leg injury, RB T.J. Yeldon stepped up. Yeldon had 123 rushing yards on 20 carries for a 6.2 ypc average, and also hauled in two catches for 7 yards.

Ole Miss MVP: Everyone pitched in today for the Rebels, but the game ball has to go to QB Bo Wallace. Wallace stayed calm, cool, and collected throughout, coming up huge in the clutch with two touchdown passes in the fourth quarter. He finished the day 18/31 with three touchdowns and no interceptions.

What’s Next? The 5-0 Rebels travel to Texas A&M, who'll be looking to rebound from their loss to Mississippi State. Alabama will try to put this game behind them quickly, but they'll have their hands full with a scrappy Arkansas squad that took A&M to overtime last weekend.