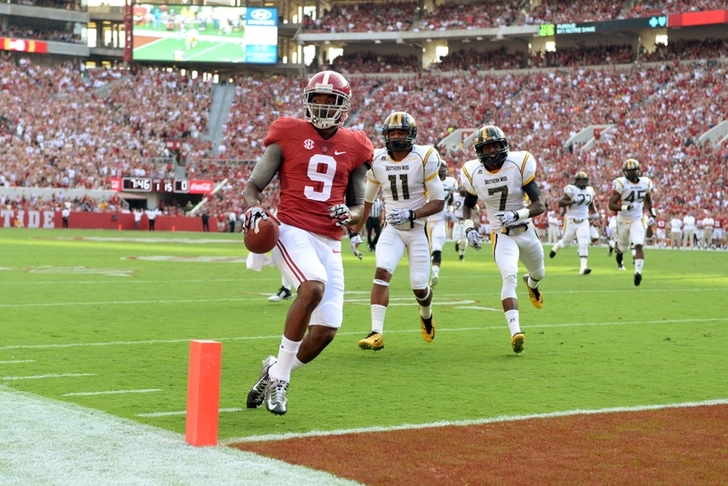 Alabama outplayed Florida in the first half, but key turnovers kept the game close at 21-14.

The Crimson Tide took over in the second half, pulling away with a 42-21 win.

Blake Sims had a career game, throwing for 445 yards and four touchdowns.

Despite being vastly outgained offensively, Florida stayed in the game thanks to four takeaways.

Alabama's defense must be credited - they allowed just 200 yards and 21 points, seven of which came as a direct result of an offensive turnover.

Jeff Driskel had a rough first half, but punched in a touchdown on the ground early in the third quarter to temporarily tie the game.

He finished with just 93 yards passing with one touchdown and two interceptions, adding 59 yards and a score on the ground.

Turning Point: After Alabama finished the third quarter with a touchdown to push the lead to 35-21, the defense came up with an interception to give the ball right back to Sims and the offense.

Cooper hauled in another touchdown just minutes later, icing the game for Alabama.

1) Blake Sims has safely won the starting quarterback job after posting a career game. There is almost no chance of Jake Coker taking the starting spot, barring injury.

2) Amari Cooper is unstoppable. With speculation that Florida would put top corner Vernon Hargreaves on Cooper to take him out of the gameplan, Cooper posted his best career game to date.

If he wasn't shutdown in this game, there's little to no chance of him slowing down all year.

3) The offense still has a few issues. Despite the offensive explosion, there were too many turnovers that kept this game from being a total blowout. Those need to be sorted out for the Tide to reach their full offensive potential.

Alabama has a bye week before playing Ole Miss on 10/4, Florida plays Tennessee on 10/4