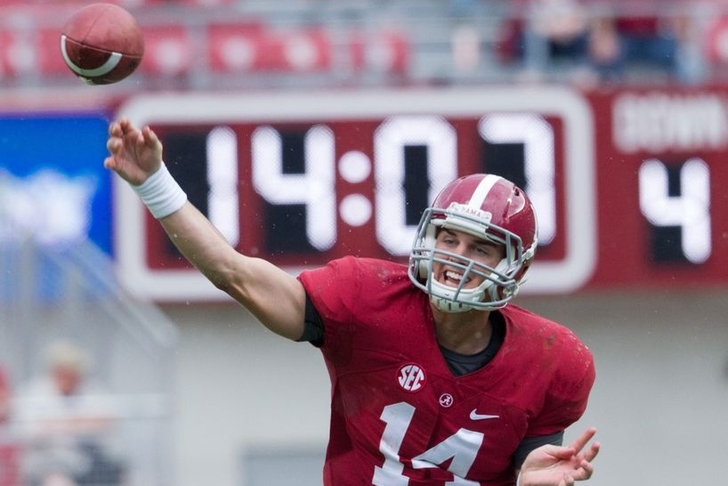 It took them a while to find their footing, but the Crimson Tide were able to pull away from Western Carolina thanks to an offensive burst late in the second quarter. The defense and the backups took care of business from there, and Alabama will head into their Iron Bowl matchup with Auburn 10-1 and undefeated at home.

Tempers were flaring on the Alabama sideline when Western Carolina pulled to within three points with 10:41 remaining in the second quarter...but whatever Nick Saban said to Lane Kiffin and his offense, the message clearly went through. Alabama scored 21 points in the final 6:44 of the second period, building a 38-14 halftime lead that was never really threatened. Jacob Coker and the second unit played a solid game from that point on, and Western Carolina wouldn't score again.

With so many players contributing on offense and defense today, we can't pick just one individual...so we're giving this to Alabama's backup running backs. Derrick Henry, Tyren Jones and Altee Tenpenny all got a chance to show what they can do today, and all three can be proud of their performance. The three combined for 231 yards and three touchdowns on 34 carries.

Alabama absolutely dominated the time of possession, holding the ball for 38 minutes to WCU's 22.

This stood out almost as much as the time of possession, but it wasn't as much of a surprise: Alabama's defense held the Western Carolina running backs to -8 yards on 13 carries, good for a -0.6 yards per carry average.

The one we've all been waiting for...Alabama hosts Auburn next Saturday at 7:45 PM ET. With Alabama's playoff hopes hanging in the balance, the stakes couldn't be higher in this year's Iron Bowl. Nick Saban wouldn't have it any other way.