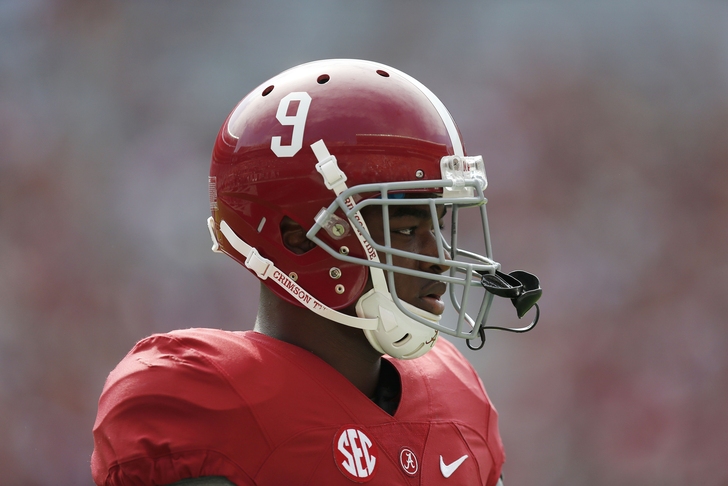 The 79th Iron Bowl was an absolute classic. The #15 Auburn Tigers and #1 Alabama Crimson Tide traded punches in true heavyweight fight fashion in the first 45 minutes, with Auburn clinging to one-score lead both after the first half and at the end of three (36-34).

The 99 combined points are the most in Iron Bowl history.

Blake Sims opened up the fourth quarter with an impressive scramble, bolting 11 yards around the left side to give Alabama a 42-36 lead (after a two-point conversion) - the fourth lead change of the game. Alabama would never relinquish that lead, bending but not breaking on defense to keep their playoff hopes alive in Tuscaloosa.

Alabama WR Amari Cooper had 13 catches for 224 yards and three touchdowns on the night.

The rest of Alabama's wide receivers? Seven catches for 88 yards and no touchdowns.

Even with Auburn's secondary keying on Cooper, they couldn't stop him.

Amari Cooper set an Iron Bowl record for receiving yards in the highest-scoring Iron Bowl game in history. He singlehandedly resurrected Alabama's chances in this game on a few different occasions, pushing Bama within one game of the College Football Playoff.

In the process, Cooper announced himself (once again) as a legitimate Heisman Trophy candidate.

WR Sammie Coates provided the Tigers a major equalizer in the receiving department, catching five balls for 206 yards and two touchdowns. When Nick Marshall connected with him on Saturday, magic happened for Auburn - enough magic to help make this a classic showdown in Tuscaloosa.

It may not have translated to the win column, but kudos to Coates (and Nick Marshall with a career-best passing day yards-wise) for doing everything possible in Auburn's quest for a road upset.

Auburn will await their bowl destination at home, while Alabama has a date with Missouri in the SEC Championship Game in Atlanta next week.