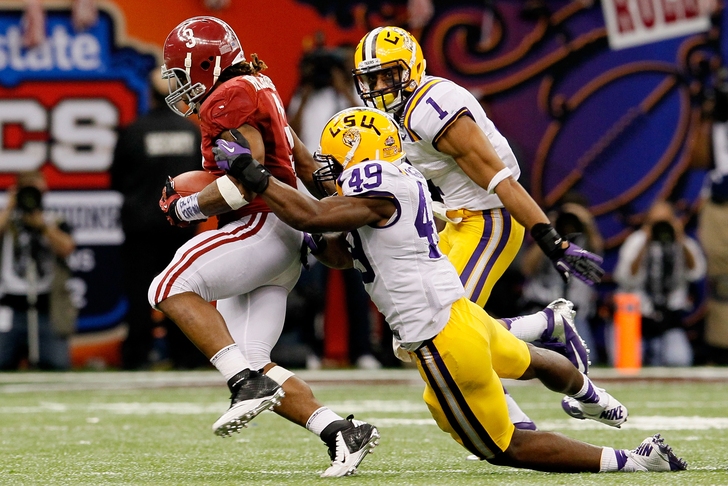 It came down to overtime, but Alabama stole some miracles from their rivals across the state to escape Death Valley with an unlikely 20-13 win.

This one came right down to the wire...first, it looked like LSU had Alabama done and dusted after going up 13-10 with just about a minute left...but the ensuing kickoff went out of bounds, Blake Sims drove the Tide downfield in a hurry and Adam Griffith sent the game to overtime. There, the Tide struck first...and LSU couldn't find a touchdown to match.

The punter? Really? Yes, really. Jamie Keehn had a monster game for the Tigers, averaging 45 yards per punt and pinning the Crimson Tide back inside their own 20 four times. In a game lost by the defense but decided without a whole lot of offense, Keehn made the biggest impact for the Tigers.

Amari Cooper had a quiet day by his own standards (83 yards and a touchdown on 8 receptions), but still managed to be Alabama's best offensive threat. While Blake Sims did well to keep the Tide alive, Cooper was their best offensive player and gets the nod as a result. Cooper is going to make an NFL team (probably the Raiders) very, very lucky if he decides to declare after this season.

Amari Cooper Highlight of the Game:

We've reached the point where Amari Cooper doing ridiculous video-game moves isn't even surprising anymore...it's just par for the course. Still, this catch/stiff-arm/juke/touchdown was something special.

Their national title hopes still alive, Alabama hosts #1 Mississippi State next Saturday in a game with absolutely massive playoff implications. LSU, meanwhile, will end their season with away games at Arkansas and Texas A&M as they turn their attention to a bowl bid.