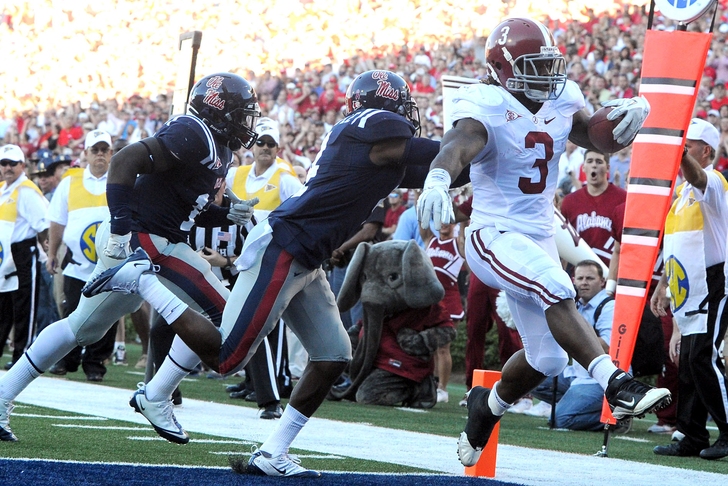 The #3 Alabama Crimson Tide are in Oxford to take on the #11 Ole Miss Rebels, and this SEC West showdown was fairly quiet until Alabama pulled ahead 14-3 late in the second quarter.

The major first-half talking point will no doubt be the serious leg injury suffered by Alabama RB Kenyan Drake. Early in the second quarter, Drake was hit awkwardly while spinning to the ground, twisting his leg while another player fell into it, and nearby players on both teams were visibly shocked and distressed at the aftermath. Drake was clearly in extreme pain, but gave a thumbs up while being carted off to applause from both fans.

Alabama's backfield will be alright - T.J. Yeldon and Derrick Henry are both world-class running backs - but the Tide will miss the consistency and grit Drake brings to the table.

Biggest Play: Without a doubt, the controversial fumble recovery that put Alabama up 14-3. The Rebels were driving with under a minute left, hoping to pull ahead at halftime, but a fumble return for a touchdown changed the complexion of the game dramatically. The officials missed a clear facemask that exposed the ball and contributed to Christion Jones' strip and recovery, and the Rebels won't be happy that a blown call turned what should have been a tight game into a 11-point deficit.

Biggest Surprise: We came in expecting a high-scoring shootout (both these teams average over 39 points per game), but until 3:44 left in the second quarter just three points had been scored. We'd expect both teams to turn up the offense in the second half.

Alabama Key Player: Blake Sims has been on point so far today, completing 10 of 15 passes for 74 yards. Sims also pulled off a flawless play-action run for Alabama's first touchdown, and the execution had even the cameraman fooled.

Ole Miss Key Player: Since no one player has really stood out from the crowd, we'll give it to Rebels QB Bo Wallace. Wallace has been decent so far, but he'll need a much better second half if Ole Miss wants to come back in this one.

Who Has The Edge? After scoring 14 unanswered points in the last four minutes of the half, Alabama has all the momentum. Ole Miss will need to dig in and step up on defense if they want to turn this scoreline around.